You are here: Home › News › Space › Unusual carbon-based molecule detected 27,000 light years away
By Will Parker on September 28, 2014 in News, Space 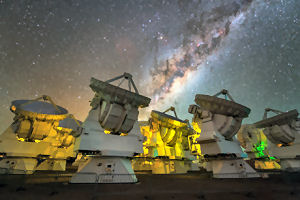 Astronomers have discovered an unusual carbon-based molecule – isopropyl cyanide – in the gaseous star-forming region Sagittarius B2. The discovery, made using the ALMA radio telescope array, suggests that the complex molecules needed for life may have their origins in interstellar space. The astronomers, from Cornell University, the Max Planck Institute for Radio Astronomy, and the University of Cologne have described their discovery in the latest issue of Science.

Until now, the organic molecules found in star-forming regions usually consisted of a single string of carbon atoms arranged in a straight chain. But the carbon structure of isopropyl cyanide branches off, making it the first interstellar detection of such a molecule, says Rob Garrod, from Cornell’s Center for Radiophysics and Space Research.

The detection opens a new frontier in the complexity of molecules that can be formed in interstellar space and that might ultimately find their way to the surfaces of planets. The branched carbon structure of isopropyl cyanide is a common feature in molecules that are needed for life – such as amino acids, which are the building blocks of proteins. This new discovery lends weight to the idea that biologically crucial molecules, like amino acids that are commonly found in meteorites, are produced early in the process of star formation – even before planets are formed.

“Understanding the production of organic material at the early stages of star formation is critical to piecing together the gradual progression from simple molecules to potentially life-bearing chemistry,” said co-discoverer Arnaud Belloche, of the Max Planck Institute for Radio Astronomy.