You are here: Home › Health › Mental Health › News › Scientists scope effects of marijuana ingredients via MRI
By Will Parker on January 3, 2012 in Mental Health, News 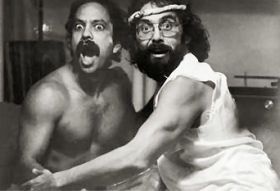 MRI brain scans of marijuana users under the influence of either tetrahydrocannabinol (THC) or cannabidiol (CBD) show that one chemical increases psychotic symptoms while the other reduces them. THC and CBD are the two main psychoactive components in marijuana.

Bhattacharyya, from the Institute of Psychiatry at King’s College in London, studied 15 healthy men who were occasional marijuana users to examine the effects of THC and CBD during salience processing by the brain. Saliency detection is believed to be an important attentional mechanism that facilitates learning and survival by enabling humans to focus their perceptual and cognitive resources on the most pertinent entity made available by sensory data. Saliency is thought to arise from the differences between items and their surroundings.

Bhattacharyya’s team obtained the MRI images from each participant on three occasions after administration of THC, CBD or a placebo. The images were obtained while the participants performed a computer based visual task of pressing buttons according to the direction arrows on a screen were pointing. This exercise, say the researchers, is a measure of salience processing.

Bhattacharyya found that THC significantly increased the severity of psychotic symptoms compared with placebo and CBD whereas there was no significant difference between the CBD and placebo conditions. Specifically, THC had a greater effect than placebo on reaction time to nonsalient relative to salient stimuli. “The magnitude of THC’s effect on response times to nonsalient stimuli was correlated with its effect on activation in the right caudate, the region where the physiological effect of THC was linked to its induction of psychotic symptoms,” the report notes.

Bhattacharyya adds that “these observations suggest that THC may increase the aberrant attribution of salience and induce psychotic symptoms through its effects on the striatum and lateral prefrontal cortex.”

Interestingly, when the effects of CBD were contrasted with THC with respect to the visual task there was a “significant effect” in the left caudate with CBD increasing the response and THC weakening it. “These effects suggest that CBD may also influence the effect of cannabis use on salience processing – and hence psychotic symptoms – by having an opposite effect, enhancing the appropriate response to salient stimuli,” the report concludes.

Related:
Discuss this article in our forum
New evidence linking marijuana use to brain abnormalities in adolescents
Large number of common drugs linked to brain impairment
Hard evidence on cannabis use and erectile dysfunction
Incense Found To Be Psychoactive