You are here: Home › Health › Mental Health › News › Alzheimer’s may begin in childhood
By Will Parker on December 10, 2013 in Mental Health, News 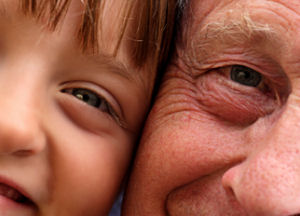 The people who carry the high-risk SORL1 gene for late-onset Alzheimer’s disease show changes in their brains beginning in early childhood, according to researchers from the Centre for Addiction and Mental Health (CAMH).

SORL1 is one of a number of genes linked to an increased risk of late-onset Alzheimer’s disease. It carries the gene code for the sortilin-like receptor, which is involved in recycling certain molecules in the brain before they develop into beta-amyloid (a toxic Alzheimer protein). SORL1 is also involved in lipid metabolism, putting it at the heart of the vascular risk pathway for Alzheimer’s disease as well.

“We need to understand where, when and how these Alzheimer’s risk genes affect the brain, by studying the biological pathways through which they work,” says CAMH geneticist Aristotle Voineskos, who led the study. “Through this knowledge, we can begin to design interventions at the right time, for the right people.”

To gauge SORL1’s effects across lifespan, Voineskos and his co-researchers studied individuals both with, and without, Alzheimer’s disease. Their approach was to identify genetic differences in SORL1, and see if there was a link to Alzheimer’s-related changes in the brain.

In the first group of healthy individuals, aged eight to 86, researchers used a brain imaging technique called diffusion tensor imaging (DTI). Even among the youngest participants in the study, those with a specific copy of SORL1 showed a reduction in white matter connections in the brain important for memory performance and executive function.

The second sample included post-mortem brain tissue from 189 individuals less than a year old to 92 years, without Alzheimer’s disease. Among those with that same copy of the SORL1 gene, the brain tissue showed a disruption in the process by which the gene translated its code to become the sortilin-like receptor.

Finally, the third set of post-mortem brains came from 710 individuals, aged 66 to 108, of whom the majority had mild cognitive impairment or Alzheimer’s. In this case, the SORL1 risk gene was linked with the presence of amyloid-beta, a protein found in Alzheimer’s disease.

Voineskos says it’s too early to provide interventions that may target these changes, but “individuals can take measures in their own lifestyle to reduce the risk of late-onset Alzheimer’s disease. Unhealthy diet, lack of exercise, smoking, and high blood pressure can all contribute to the development of the illness.”

Related:
Discuss this article in our forum
Liver, not brain, may originate Alzheimer’s
Alzheimer’s may be transmissible a la mad cow disease
Marijuana memory problems prevented with Advil

Alzheimer's Awareness; In This Family No One Fights Alone Ornament; Custom Or...

The End Of Alzheimer's Starts With Me Purple Pin

Aliceheimer's: Alzheimer's Through the Looking Glass by Walrath, Dana