You are here: Home › News › Depression caused by brain inflammation?
By Will Parker on October 21, 2010 in News 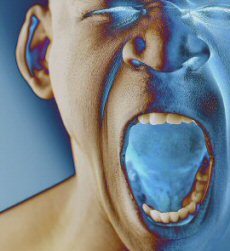 Chronic depression is an adaptive, reparative neurobiological process gone wrong, say two University of California, San Diego, researchers. They suggest that the debilitating mental state originates from ancient mechanisms used by the body to deal with physical injury, such as pain, tissue repair and convalescent behavior. The researchers hope their study, published in Neuroscience and Biobehavioral Review, will lead to a paradigm shift in thinking about depression.

“In contrast to other biological theories of depression, we started with a slightly different question,” said Karen Wager-Smith, a post-doctoral researcher. “Other theories address the question: ‘What is malfunctioning in depression?’ We took a step back and asked the question: ‘What is the biology of the proper function of the depressive response?’ Once we had a theoretical model for the biology of a well-functioning depressive response, it helped make sense of all the myriad differences between depressed and non-depressed subjects that the biomedical approach has painstakingly amassed.”

According to Wager-Smith and co-researcher Athina Markou, severe stress and adverse life events, such as losing a job or family member, prompt neurobiological processes that physically alter the brain. Neurons change shape and connections. Some die, but others sprout as the brain rewires itself. This neural remodeling employs basic wound-healing mechanisms, which means it can be painful and occasionally incapacitating, even when it’s going well.

“It’s necessary and normal so that an individual can adapt, change behavior and deal with altered circumstances,” said Markou, a professor of psychiatry. Real problems occur only “when these restructuring processes go into overdrive, beyond what is necessary and adaptive, and for longer periods of time than needed. Then depression becomes pathological.”

The theory extends findings made by other researchers that the neurobiological substrates of physical and emotional pain overlap. Just as the body’s repair mechanisms for physical injury can sometimes result in chronic pain and inflammation, so too can the response to psychological trauma, resulting in chronic depression.

The study argues that existing, conflicting views about depression actually describe different aspects of the same phenomenon. Psychoanalytic and sociological theories refer to the psychological transformation that occurs during a productive depressive episode. Biomedical theories relate to the neural remodeling that underlies this psychological change. And neurodegenerative theories account for remodeling malfunctions.

“The big question, of course, is why aren’t all people affected the same way,” said Markou. “Why do some people deal effectively with stress, but others perpetuate a pathological state? This is an interesting question for future research.”

The findings may have profound clinical ramifications. If psychological and physical pain responses share similar biological mechanisms, then analgesics could be useful in treating at least some symptoms of depression. Similarly, if chronic depression is proven to be a neuroinflammatory condition, then anti-inflammatory treatments should also have some antidepressant effects.

Related:
Facebook use associated with depression
Our Love Affair With Depression
New target for antidepressants
Do antidepressant meds work through personality change?