You are here: Home › News › Space › First exoplanet images from Gemini
By Will Parker on January 7, 2014 in News, Space 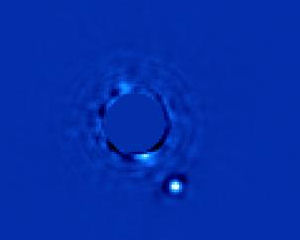 After nearly a decade of development, construction, and testing, the world’s most advanced instrument for directly imaging planets around other stars is pointing skyward and producing its first images of planets outside our solar system.

The Gemini Planet Imager (GPI), was designed, built, and optimized for imaging faint planets next to bright stars and analyzing their atmospheres. It is attached to one of the world’s biggest telescopes – the 8-meter Gemini South telescope in Chile. An extraordinarily complex astronomical instrument the size of a small car, the GPI carried out its first observations last November.

“Even these early first-light images are almost a factor of 10 better than the previous generation of instruments. In one minute, we are seeing planets that used to take us an hour to detect,” says Bruce Macintosh of the Lawrence Livermore National Laboratory who led the team that built the instrument.

“Seeing a planet close to a star after just one minute, was a thrill, and we saw this on only the first week after the instrument was put on the telescope!” added Gemini team member Fredrik Rantakyro. “Imagine what it will be able to do once we tweak and completely tune its performance.”

For GPI’s first observations, the team targeted previously known planetary systems, including the well-known Beta Pictoris system and the very young planet Beta Pictoris b. The researchers also used the instrument’s polarization mode – which can detect starlight scattered by tiny particles – to study a faint ring of dust orbiting the very young star HR4796A (pictured below). With previous instruments, only the edges of this dust ring (which may be the debris remaining from planet formation) could be seen, but with GPI, astronomers can observe the entire circumference of the ring. 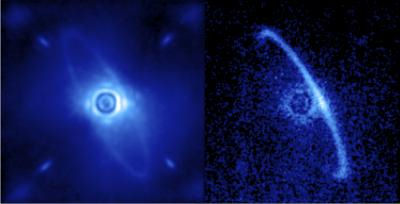 Macintosh said the GPI was the world’s most sophisticated astronomical system for compensating for turbulence in the Earth’s atmosphere – an ongoing problem for ground-based telescopes. The GPI senses atmospheric turbulence and corrects it with a 2-centimeter-square deformable mirror with 4,000 actuators. The new mirror corrects for atmospheric distortions by adjusting its shape 1,000 times per second with accuracy better than 1 nanometer. Together with the other parts of GPI, astronomers can directly image extra-solar planets that are 1 million to 10 million times fainter than their host stars. This year, the GPI team will begin a large-scale survey, looking at 600 young stars to see what planets orbit them. GPI will also be available for other projects, ranging from studies of planet-forming disks to outflows of dust from massive, dying stars.

“Some day, there will be an instrument that will look a lot like GPI, on a telescope in space,” Macintosh predicts. “And the images and spectra that will come out of that instrument will show a little blue dot that is another Earth.”