You are here: Home › News › Space › Work by celestial archaeologists hints at Earth’s ultimate fate
By Will Parker on March 26, 2014 in News, Space 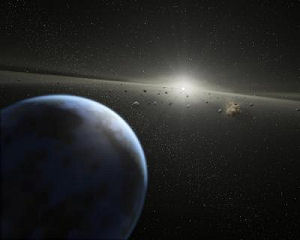 For decades, astronomers have known that the atmospheres surrounding stars are often “polluted” with elements like carbon, silicon, and iron. How these elements came to be there has been an intriguing mystery that an international team of astronomers believe they have now solved.

Led by Professor Martin Barstow, President-elect of the Royal Astronomical Society, the astronomers focused their attention on the stars known as hot, young, white dwarfs – the super-dense remains of Sun-like stars that ran out of fuel and collapsed to about the size of the Earth. The atmospheres of these stellar remnants should consist mainly of hydrogen and helium.

“The precise origin of the [contaminating] metals has remained a mystery and extreme differences in their abundance between stars could not be explained,” said Barstow. “It was believed that this material was ‘levitated’ by the intense radiation from deeper layers in the star.”

For their investigation, details of which appear in the Monthly Notices of the Royal Astronomical Society, the astronomers surveyed the spectra of 89 white dwarfs. “We found that in stars with polluted atmospheres the ratio of silicon to carbon matched that seen in rocky material, much higher than found in stars or interstellar gas,” said Barstow.

The study points to the ultimate fate of the Earth billions of years from now – ending up as a contamination within the atmosphere of the white dwarf Sun. It also hints that follow-up work will be able to tell us about the composition of rocky planets orbiting other stars. “This work is a form of celestial archaeology where we are studying the ‘ruins’ of rocky planets and/or their building blocks, following the demise of the main star,” Barstow said.