You are here: Home › News › Space › Wobbly planets could be best place for finding life, say astrobiologists
By Will Parker on April 16, 2014 in News, Space 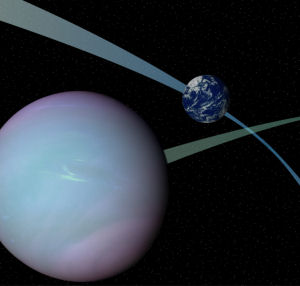 Pivoting planets that lean one way and then change orientation within a relatively short time period might be surprisingly habitable. That’s according to NASA scientists who say the climate effects generated on these wobbling worlds could prevent them from turning into glacier-covered ice lockers, even if those planets are somewhat far from their stars.

“Planets like these are far enough from their stars that it would be easy to write them off as frozen, and poor targets for exploration, but in fact, they might be well-suited to supporting life,” said Shawn Domagal-Goldman, an astrobiologist at NASA. “This could expand our idea of what a habitable planet looks like and where habitable planets might be found.”

The new modeling considers planets that have the same mass as Earth, orbit a Sun-like star and have one or two gas giants orbiting nearby. In some cases, gravitational pulls from those massive planets could change the orientation of the terrestrial world’s axis of rotation within tens to hundreds of thousands of years – a blink of an eye in geologic terms.

Though it might seem far-fetched for a world to experience such see-sawing action, scientists have already spotted an arrangement of planets where this could happen, in orbit around the star Upsilon Andromedae. There, the orbits of two enormous planets were found to be inclined at an angle of 30 degrees relative to each other. (One planet was, as usual, farther from the star than the other planet.)

Compared to our solar system, that arrangement looks extreme. The orbits of Earth and the other seven planets differ by 7 degrees at most. Pluto, with the most tilted orbit in our solar system, can only manage a relatively modest 17 degrees.

The team ran thousands of simulations for planets in 17 varieties of simplified planetary systems. The models the researchers built allowed them to adjust the tilt of the planetary orbits, the lean in the axes of rotation, and the ability of the terrestrial planet’s atmosphere to let in light.

The scientists found that in some cases, tilted orbits can cause a planet to wobble like a top that’s almost finished spinning – and that wobbling would have a big impact on the planet’s glaciers and climate. Earth’s history indicates that the amount of sunlight glaciers receive strongly affects how much they grow and melt. Extreme wobbling, like that seen in some models in this study, would cause the poles to point directly at the sun from time to time, melting the glaciers. As a result, some planets would be able to maintain liquid water on the surface despite being located nearly twice as far from their stars as Earth is from the Sun.

The habitability concept is explored in a paper published in Astrobiology. Lead author John Armstrong, of Weber State University, said that rather than working against habitability, the rapid changes in the orientation of the planet could turn out to be a real boon for the nurturing of life.

Trying to sound sexier? Sorry, guys, you just can’t do it
Kepler mission identifies most Earth-like exoplanet yet discovered