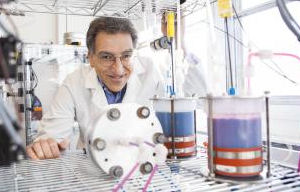 Harvard scientists have developed a metal-free flow battery based on the electrochemistry of the naturally abundant, inexpensive, organic molecules that store energy in plants and animals. The new battery could provide the final piece in the renewable energy puzzle – storing energy from sources such as wind and solar economically and reliably.

Flow batteries work by storing energy in chemical fluids contained in external tanks instead of within the battery container itself. The two main components – the electrochemical conversion hardware that produces the electricity and the chemical storage tanks – may be independently sized. Thus the amount of energy that can be stored is limited only by the size of the tanks.

In solid-electrode batteries, such as those commonly found in cars and mobile devices, the power conversion hardware and energy capacity are packaged together in one unit and cannot be decoupled. Consequently they can maintain peak discharge power for less than an hour before being drained. Current battery technologies are also dogged byenvironmentally unfriendly chemical by-products.

For this reason, a growing number of scientists have focused their attention on flow battery technology. But until now, flow batteries have relied on chemicals that are expensive or difficult to maintain, driving up the energy storage costs.

To date, the active components of electrolytes in most flow batteries have been metals. Vanadium is used in the most commercially advanced flow battery technology now in development, but its cost makes widespread deployment unlikely. The new flow battery developed by the Harvard team already performs as well as vanadium flow batteries, with chemicals that are significantly less expensive, and with no precious metal electrocatalyst.

Key to the new battery tech are carbon-based molecules known as quinones, which are abundant in crude oil as well as in green plants. The molecule that the Harvard team used in its first quinone-based flow battery is almost identical to one found in rhubarb. 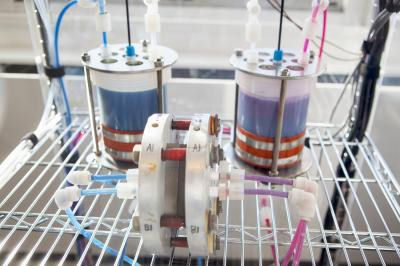 “The whole world of electricity storage has been using metal ions in various charge states but there is a limited number that you can put into solution and use to store energy, and none of them can economically store massive amounts of renewable energy,” said researcher Roy G. Gordon. “With organic molecules, we introduce a vast new set of possibilities. With these quinones we have the first ones that look really good.” The technology could have applications at the consumer level, according to team member Michael Marshak. “Imagine a device the size of a home heating oil tank sitting in your basement. It would store a day’s worth of sunshine from the solar panels on the roof of your house, potentially providing enough to power your household from late afternoon, through the night, into the next morning, without burning any fossil fuels.”

Team leader Michael J. Aziz (pictured top of page) added that the next steps will be to further test and optimize the system and bring it toward a commercial scale. Aziz said he also expects to achieve significant improvements in the underlying chemistry of the battery system. “I think the chemistry we have right now might be the best that’s out there for stationary storage and quite possibly cheap enough to make it in the marketplace. But we have ideas that could lead to huge improvements. A safe and economical flow battery could play a huge role in our transition off fossil fuels to renewable electricity. I’m excited that we have a good shot at it.”

One of a Kind MOTHERBOARD Clock. Handmade by using recycled computer parts