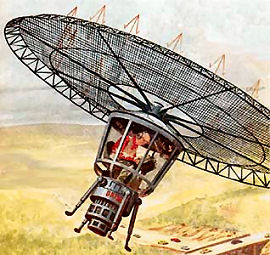 Largely regarded as a scientific curiosity, a new investigation into electrohydrodynamic thrust has found that it may actually be more efficient than jet propulsion.

Electrohydrodynamic thrust – sometimes referred to as “ionic wind” – was first identified in the 1960s. A basic ionic thruster consists of three parts: a very thin copper electrode, called an emitter; a thicker tube of aluminum, known as a collector; and the air gap in between. A lightweight frame typically supports the wires, which connect to an electrical power source. As voltage is applied, the field gradient strips away electrons from nearby air molecules. These newly ionized molecules are strongly repelled by the corona wire, and strongly attracted to the collector. As this cloud of ions moves toward the collector, it collides with surrounding neutral air molecules, pushing them along and creating a wind – or thrust.

Since its discovery, the phenomenon has largely been confined to basement experiments where hobbyists build lightweight vehicles made of balsa wood, aluminum foil and wire that lift off and hover with increased voltage.

Despite the wealth of hobbyist information available, there have until now been few rigorous studies of ionic wind as a viable propulsion system. It was theorized that ionic thrusters would be extremely inefficient, requiring massive amounts of electricity to produce enough thrust to propel a vehicle.

But researchers at MIT have run their own experiments and found that ionic thrusters may be a far more efficient source of propulsion than conventional jet engines. In their experiments, they found that ionic wind produces 110 newtons of thrust per kilowatt, compared with a jet engine’s 2 newtons per kilowatt. The research team has published their findings in the Proceedings of the Royal Society.

The researchers, Steven Barrett and Kento Masuyama, report that the device was most efficient at producing lower thrust – a desirable, albeit counterintuitive, result. “It’s kind of surprising, but if you have a high-velocity jet, you leave in your wake a load of wasted kinetic energy,” Barrett explains. “So you want as low-velocity a jet as you can, while still producing enough thrust. An ionic wind is a good way to produce a low-velocity jet over a large area.”

Barrett firmly believes that ionic wind could be used as a propulsion system for small, lightweight aircraft. In addition to their relatively high efficiency, ionic thrusters are silent, and invisible in infrared, as they give off no heat – ideal traits, he says, for a surveillance vehicle. “You could imagine all sorts of military or security benefits to having a silent propulsion system with no infrared signature,” says Barrett.

The researchers acknowledge that there is one big obstacle to ionic wind propulsion: thrust density (the amount of thrust produced per given area). Ionic thrusters depend on the wind produced between electrodes; the larger the space between electrodes, the stronger the thrust produced. That means lifting a small aircraft and its electrical power supply would require a very large air gap. Barrett envisions that electrodynamic thrusters for aircraft would encompass the entire vehicle.

Another drawback is the voltage needed to get a vehicle off the ground: Small, lightweight balsa models require several kilovolts. Barrett estimates a small craft, with onboard instrumentation and a power supply, would need hundreds, or thousands, of kilovolts.

Despite the hurdles, the team believe more research is warranted. “[Ionic thrusters] are viable insofar as they are efficient,” concluded Barrett. “There are still unanswered questions, but because they seem so efficient, it’s definitely worth investigating further.”

Related:
Discuss this article in our forum
Earth to Moon on a cup of fuel
Breakthrough In Propellant-Free Space Propulsion
New Plasma Thruster Promises Faster Spacecraft