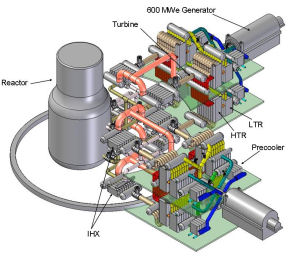 Turbines that utilize supercritical carbon dioxide (S-CO2) for the generation of electricity could deliver a huge 50 percent improvement in efficiency compared to steam turbines, say scientists from Sandia National Laboratories.

Used for thermal and nuclear generation of electricity, the new Brayton cycle S-CO2turbines would replace steam-driven Rankine cycle turbines, which have a much lower efficiency, corrode easily and occupy 30 times as much space (large turbines and condensers are required to dispose of excess steam). The Sandia researchers say a Brayton cycle S-CO2generator rig could yield 20 megawatts of electricity from a package with a volume as small as four cubic meters.

The Brayton cycle is already in wide use today – in jet planes. “This machine is basically a jet engine running on a hot liquid,” said Sandia’s Steve Wright. “There is a tremendous amount of industrial and scientific interest in supercritical CO2 systems for power generation using all potential heat sources including solar, geothermal, fossil fuel, biofuel and nuclear.”

Wright explained that with carbon dioxide, it becomes an unusually dense “supercritical” liquid at the point where it is held between the gas phase and liquid phase. The supercritical properties of carbon dioxide at temperatures above 500 C and pressures above 7.6 megapascals enable the system to operate with very high thermal efficiency, exceeding even those of a large coal-generated power plant and nearly twice as efficient as that of a gasoline engine (about 25 percent).

Compared with other gas turbines, the S-CO2 Brayton system could increase the electrical power produced per unit of fuel by 40 percent or more. The combination of low temperatures, high efficiency and high power density allows for the development of very compact, transportable systems that are more affordable because only standard engineering materials (stainless steel) are required, less material is needed, and the small size allows for advanced-modular manufacturing processes.

Sandia currently has two supercritical CO2 test loops. A power production loop has been running and producing approximately 240 kilowatts of electricity during the developmental phase. A second loop is used to research the unusual issues of compression, bearings, seals, and friction that exist near the critical point, where the carbon dioxide has the density of liquid but otherwise has many of the properties of a gas.

Test results will illustrate the capability of the concept, particularly its compactness, efficiency and scalability to larger systems. Future plans call for commercialization of the technology and development of an industrial demonstration plant at 10 MW of electricity.