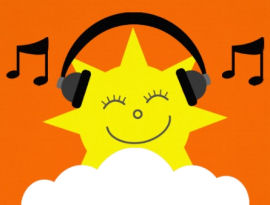 The acoustic vibrations from pop and rock music can improve the performance of solar cells by as much as 40 percent, say scientists from Queen Mary University of London and Imperial College London.

The solar cells used in the study were comprised of billions of nanorods made from zinc oxide, which were then covered with an active polymer that converts sunlight into electricity.

Using the piezoelectric properties of the zinc oxide material, the researchers were able to show that sound levels as low as 75 decibels (about the same as typical roadside noise) could significantly improve the solar cell’s performance.

Scientists had previously shown that applying pressure or strain to zinc oxide materials could result in a piezoelectric effect. However, the effect of these piezoelectric voltages on solar cell efficiency had not received significant attention before.

“After investigating systems for converting vibrations into electricity this is a really exciting development that shows a similar set of physical properties can also enhance the performance of a photovoltaic,” said researcher Steve Dunn, from Queen Mary’s.

The team initially thought the sound waves would not have any significant overall effect on the power output. “The key for us was that not only that the random fluctuations from the sound didn’t cancel each other out, but also that some frequencies of sound seemed really to amplify the solar cell output – so that the increase in power was a remarkably big effect considering how little sound energy we put in,” explained study co-leader James Durrant.

The team eventually tried playing music instead of flat tones, which led to a 40 per cent increase in efficiency. “The biggest difference we found was when we played pop music rather than classical, which we now realize is because our acoustic solar cells respond best to the higher pitched sounds present in pop music,” Durrant said.

The study, appearing in the journal Advanced Materials, has implications for improving solar energy generation in environments subject to acoustic vibrations, such as vehicles or personal electronics.

PINK FLOYD DARK SIDE OF THE MOON [LP] NEW VINYL