You are here: Home › News › Worry Fuel › A bad boss can cripple your immune system
By Will Parker on November 5, 2013 in News, Worry Fuel 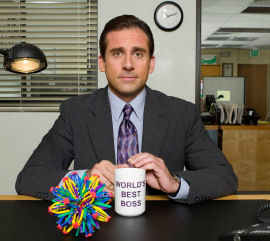 A stressful workplace can dramatically change gene expression in our immune system and significantly impact our health, say Ohio State University scientists in the journal Proceedings of the National Academy of Sciences.

Study co-author John Sheridan said that although the mind-body health connection is well established, the inner workings of that association are still not clearly understood. His new study focuses on stress associated with social defeat, and how it changes the brain and body in ways that affect behavior and health.

In Sheridan’s experiments, mice are repeatedly subjected to stress that might resemble a person’s persistent life stressors. For example, male mice living together are given time to establish a hierarchy, and then an aggressive male is added to the group for two hours at a time. This elicits a “fight or flight” response in the resident mice as they are repeatedly defeated by the intruder.

Sheridan’s team then compared cells circulating in the blood of mice that had experienced repeated social defeat to cells from control mice that were not stressed. The stressed mice had an average fourfold increase in the frequency of immune cells in their blood and spleen compared to the normal mice.

Genome-wide analysis of these cells that had traveled to the spleen in the stressed mice showed that almost 3,000 genes were expressed at different levels – both higher and lower – compared to the genes in the control mice. Many of the up-regulated genes in the immune cells of stressed mice gave the cells the power to become inflammatory rapidly and efficiently.

A typical immune response to a pathogen or other foreign body requires some inflammation, which is generated with the help of immune cells. But when inflammation is excessive and has no protective or healing role, the condition can lead to an increased risk for cardiovascular diseases, diabetes and obesity, as well as other disorders.

The study underscores that these dramatic effects were the result of chronic stress only. “There is no traditional viral or bacterial challenge – we’re generating the challenge via a psychological response,” said co-researcher Nicole Powell. “This study provides a nice mechanism for how psychology impacts biology. Other studies have indicated that these cells are more inflammatory; our work shows that these cells are primed at the level of the gene, and it’s directly due to the sympathetic nervous system.”

Sheridan adds that the findings are directly applicable to humans. “The cells share many of the same characteristics in terms of their response to stress,” he explained. “There is a stress-induced alteration in the bone marrow in both our mouse model and in chronically stressed humans that selects for a cell that’s going to be pro-inflammatory. So what this suggests is that if you’re working for a really bad boss over a long period of time, that experience may play out at the level of gene expression in your immune system.”