You are here: Home › News › Space › “Freakish” asteroid resembles rotating lawn sprinkler
By Will Parker on November 7, 2013 in News, Space

Using the Hubble space telescope, astronomers have discovered a “weird and freakish object” resembling a rotating lawn sprinkler in the asteroid belt between Mars and Jupiter. 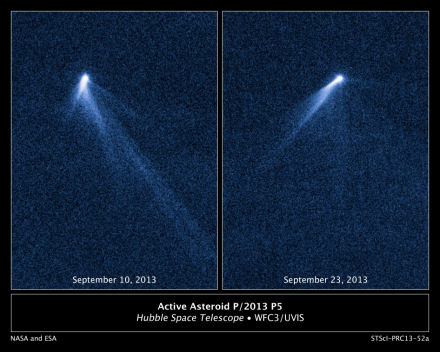 Unlike all other known asteroids, which appear simply as tiny points of light, this asteroid, designated P/2013 P5, has six comet-like tails of dust radiating from it like spokes on a wheel. The mysterious object, detailed in the journal Astrophysical Journal Letters, has left astronomers scratching their heads and searching for an explanation for the asteroid’s strange appearance.

“We were literally dumbfounded when we saw it,” said lead investigator David Jewitt, of the University of California at Los Angeles. “Even more amazing, its tail structures change dramatically in just 13 days as it belches out dust. That also caught us by surprise. It’s hard to believe we’re looking at an asteroid.”

The asteroid was first seen as an unusually fuzzy-looking object with the Pan-STARRS survey telescope in Hawaii. Its multiple tails were discovered in images taken by NASA’s Hubble Space Telescope on September 10, 2013. When Hubble returned to the asteroid on September 23, its appearance had totally changed; it looked as if the entire structure had swung around. “We were completely knocked out,” recalled Jewitt.

One interpretation is that the asteroid’s rotation rate increased to the point where its surface started flying apart, ejecting dust in episodic eruptions. Jewitt said the team has ruled out a recent asteroid impact scenario because a large quantity of dust would have been blasted into space all at once. This object, he explained, has ejected dust for at least five months, with modeling revealing that the first ejection event occurred on April 15.

Jewitt speculates the asteroid could possibly have been spun up from the pressure of sunlight. If its spin rate became fast enough, he said, the asteroid’s weak gravity would no longer be able to hold it together.

So far, it appears that only a small fraction of the asteroid’s main mass – perhaps 100 to 1,000 tons – has been lost, Jewitt said. The 700-foot-radius nucleus is thousands of times more massive.

Astronomers will continue observing P/2013 P5 to see whether the dust leaves the asteroid in the equatorial plane. If it does, this would be strong evidence for a rotational breakup.

Jewitt suggests such asteroids must be a relatively common phenomenon in the asteroid belt. “In astronomy, where you find one, you eventually find a whole bunch more,” he said. “This is an amazing object and almost certainly the first of many more to come.”