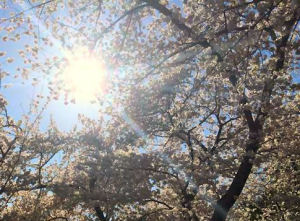 “We believe our system is a revolutionary leap forward in the field of artificial photosynthesis,” says Peidong Yang, a chemist at Berkeley Lab and one of the leaders of this study. “Our system has the potential to fundamentally change the chemical and oil industry in that we can produce chemicals and fuels in a totally renewable way, rather than extracting them from deep below the ground.”

Yang is one of three authors of a paper – “Nanowire-bacteria hybrids for unassisted solar carbon dioxide fixation to value-added chemicals” – describing this research in the journalNano Letters.

The system starts with an “artificial forest” of nanowire heterostructures, consisting of silicon and titanium oxide nanowires. “Our artificial forest is similar to the chloroplasts in green plants,” Yang explained. “When sunlight is absorbed, photo-excited electron-hole pairs are generated in the silicon and titanium oxide nanowires, which absorb different regions of the solar spectrum. The photo-generated electrons in the silicon will be passed onto bacteria for the CO2 reduction while the photo-generated holes in the titanium oxide split water molecules to make oxygen.”

“S. ovata is a great carbon dioxide catalyst as it makes acetate, a versatile chemical intermediate that can be used to manufacture a diverse array of useful chemicals,” says Berkeley researcher Michelle Chang. “We were able to uniformly populate our nanowire array with S. ovata using buffered brackish water with trace vitamins as the only organic component.”

Once the carbon dioxide has been reduced by S. ovata to acetate (or some other biosynthetic intermediate), genetically engineered E.coli are used to synthesize targeted chemical products. To improve the yields of targeted chemical products, the S. ovata andE.coli were kept separate for this study. In the future, these two activities – catalyzing and synthesizing – could be combined into a single step process.

The yields of target chemical molecules produced from the acetate were also encouraging – as high as 26 percent for butanol, a fuel comparable to gasoline, 25 percent for amorphadiene, a precursor to the antimaleria drug artemisinin, and 52 percent for the renewable and biodegradable plastic PHB. Improved performances are anticipated with further refinements of the technology. “We are currently working on our second generation system which has a solar-to-chemical conversion efficiency of three-percent,” Yang says. “Once we can reach a conversion efficiency of 10-percent in a cost effective manner, the technology should be commercially viable.”