You are here: Home › Biology › News › Scientists discover breathing to be the primary mechanism for weight loss
By Will Parker on December 17, 2014 in Biology, News 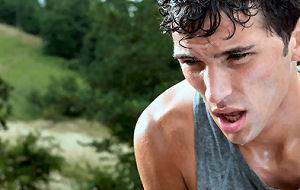 It’s long been known that human fat cells are composed of carbon, hydrogen, and oxygen atoms. What’s just been discovered by Australian scientists is that when we “burn” fat, almost all the broken-down fat molecules are exhaled through the lungs as carbon dioxide.

The research team, led by Ruben Meerman and Andrew Brown of the University of New South Wales, discovered that when 1kg (2.2lb) of fat is fully oxidized (“burnt”), 0.84kg (1.9lb) departs via the lungs as carbon dioxide. The remaining 0.16kg (0.3lb) becomes water which may be excreted in the urine, feces, sweat, breath, or tears.

The analysis shows that the inhaled oxygen required for this metabolic process weighs nearly three times more than the fat being lost.

“None of this biochemistry is new, but for unknown reasons it seems nobody has thought of performing these calculations before,” says Brown. “The quantities make perfect sense but we were surprised by the numbers that popped out.”

Meerman explained that at rest, an average 70kg (154lb) person exhales around 200ml (0.4 pint) of CO2 in 12 breaths per minute. “Each of those breaths therefore excretes 33mg of CO2, of which 9mg is carbon. By simply exhaling 17,280 times, an average person therefore loses at least 200g (7oz) of carbon every day and roughly a third of that weight loss is achieved during eight hours of sleep.”

“Keeping the weight off simply requires that you put less back-in by eating than you’ve exhaled by breathing,” added Brown. “Replacing one hour of rest with exercise that raises the metabolic rate to seven times that of resting by, for example, jogging, removes an additional 40g (1.4oz) of carbon from the body, raising the total by about 20 percent to 240g (8.4oz).