You are here: Home › News › Space › Supermassive black hole spins super-fast
By Will Parker on February 27, 2013 in News, Space

Imagine a sphere more than 2 million miles across spinning so fast that its surface is traveling at nearly the speed of light. Such an object exists: the supermassive black hole at the center of the spiral galaxy NGC 1365. 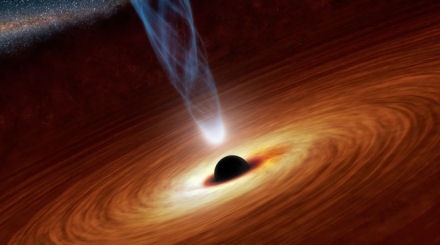 Astronomers measured its astonishing spin-rate using data from the Nuclear Spectroscopic Telescope Array (NuSTAR) and the European Space Agency’s XMM-Newton X-ray satellites. “This is the first time anyone has accurately measured the spin of a supermassive black hole,” said one of the investigators, Guido Risaliti of the Harvard-Smithsonian Center for Astrophysics.

Previous X-ray measurements were uncertain because obscuring clouds around the black hole could, in theory, have been confusing the results. By working together with XMM-Newton, NuSTAR was able to see a broader range of X-ray energy, penetrating deeper into the region around the black hole. The new observations ruled out the idea of obscuring clouds, demonstrating that spin rates of supermassive black holes can be determined conclusively. The results from NGC 1365 showed that the black hole is spinning close to the maximal rate allowed by Einstein’s theory of gravity.

“This is hugely important to the field of black hole science,” said Lou Kaluzienski, NuSTAR program scientist at NASA. “NASA and ESA telescopes tackled this problem together. In tandem with the lower-energy X-ray observations carried out with XMM-Newton, NuSTAR’s unprecedented capabilities for measuring the higher energy X-rays provided an essential, missing puzzle piece for unraveling this problem.”

“These monsters, with masses from millions to billions of times that of the sun, are formed as small seeds in the early universe and then grow by swallowing stars and gas in their host galaxies, and/or merging with other giant black holes when galaxies collide,” added Risaliti. “Measuring the spin of a supermassive black hole is fundamental to understanding its past history and that of its host galaxy.”

Studying a supermassive black hole also allows theorists to test Einstein’s theory of general relativity in extreme conditions. Relativity describes how gravity affects the structure of space-time, and nowhere is space-time more distorted than in the immediate vicinity of a black hole.

The team also has additional observations of NGC 1365 that they will study to determine how conditions other than black hole spin change over time. Those data are currently being analyzed. At the same time, other teams are observing several other supermassive black holes with NuSTAR and XMM-Newton.