You are here: Home › News › Space › Milky Way has “billions” of habitable planets
By Will Parker on January 12, 2012 in News, Space 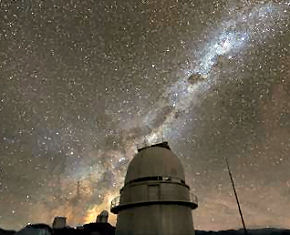 Reporting their findings in Nature, the team say that most of the Milky Way’s 100 billion stars have planets that are very similar to the Earth-like planets in our own solar system (Mercury, Venus, Earth and Mars), while planets like Jupiter and Saturn are relatively rare. “On average, there are 1.6 planets in the area around the stars that corresponds to the area between Venus and Saturn,” explained team member Uffe Gr�e J�rgensen, from the Niels Bohr Institute at the University of Copenhagen.

This means that finding a planet by microlensing is not easy, in the six year’s worth of microlensing data used in the analysis, only three exoplanets were actually detected: a super-Earth, and planets with masses comparable to Neptune and Jupiter. But by microlensing standards, this is an impressive haul. In detecting three planets, either the astronomers were astonishingly lucky, or, planets are so abundant in the Milky Way that it was inevitable.

Combining data from the three positive exoplanet detections with seven additional detections from earlier work (as well as the huge numbers of non-detections in the six year’s worth of data), the team calculated that one-in-six of the stars studied hosts a planet of similar mass to Jupiter, half have Neptune-mass planets and two-thirds have super-Earths.

The survey was sensitive to planets between 75 million kilometers and 1.5 billion kilometers from their stars (in our solar system this range would include all the planets from Venus to Saturn) and with masses ranging from five times the Earth up to ten times Jupiter. The results strongly suggest that the average number of planets around a star is greater than one. “[The calculations] show that out of the Milky Way’s 100 billion stars, there are about 10 billion stars with planets in the habitable zone. This means that there may be billions of habitable planets in the Milky Way,” explained Jørgensen.

“We used to think that the Earth might be unique in our galaxy. But now it seems that there are literally billions of planets with masses similar to Earth orbiting stars in the Milky Way,” added team member Daniel Kubas, from the Institut d’Astrophysique de Paris.