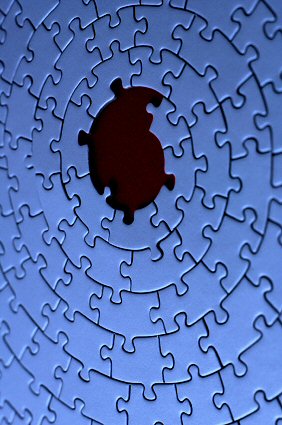 There are areas of science that are speculative, and then there are those relatively solid areas considered as close to fact as possible - a scale of 1 to 10 on the science-o-meter, if you like. Despite the controversy that has surrounded the formation of black holes - largely to do with what happens at the event horizon - we've all come to regard black hole theory as being pretty close to a 10.

But general relativity and quantum mechanics are uncomfortable bedfellows when it comes to explaining black hole formation and a few researchers now contend that black holes may not actually fully form at all. If Case Western Reserve University physicists Tanmay Vachaspati, Dejan Stojkovic and Lawrence M. Krauss's new study is correct, our current concept of black holes is about to take a dramatic slide down the ol' science-o-meter. They argue that the formation of new black holes just doesn't happen. There's "nothing there," says the Case Western team.

To say, as the Case team does, that the black hole conundrum is "complicated and very complex" - in reference to the overall problem, and the team's approach to solving it - is what you'd call an understatement. Nonetheless, it's a topic that's worth trying to get your head around, or at least die trying. The problem revolves around what happens once information (anything can be construed as information) enters and collapses into a black hole, and whether this information is then lost forever. Current physics says yes, it is lost, but by siding with this theory modern physics breaks another fundamental tenant; that information cannot be destroyed. "If you define the black hole as some place where you can lose objects, then there is no such thing because the black hole evaporates before anything is seen to fall in," explains Vachaspati.

Contrary to established scientific theory, the team argue in their paper that anything (detritus, light, or passing super-villains) about to undergo a bit of black hole squishing would instead forever remain perched on the event horizon, appearing to be falling inside the event horizon and collapsing, while never actually doing so.

Theoretically working from matter that was nonsingular and collapsing it, the team looked for any evidence of an event horizon, a sign that would indicate black hole formation. But working with numerous types of equations - from general relativity, quantum mechanics, and finally Schrodinger formalism - the team noted that while the mass may shrink in size, it will not collapse inside an event horizon. The reason for this, they explain, is because of the evidence of non-thermal pre-Hawking radiation emissions from black holes.

Using Schrodinger formalism, the researchers support their reasoning by showing how pre-Hawking radiation indicates that any information regarding the energy emitted from radiation evaporates before it has the chance to form an event horizon. If you didn't understand that, it basically means that you can't lose stuff down a black hole. "An outside observer will never lose an object down a black hole," says team member Stojkovic. "If you're sitting outside and throwing something into the black hole, it will never pass over but will stay outside the event horizon even if one considers the effects of quantum mechanics. In fact, since in quantum mechanics the observer plays an important role in measurement, the question of formation of an event horizon is much more subtle to consider."

It's mind-bending stuff, and it so happens that we may not have to wait very long to find out if they're right or not. In 2008, physicists will have access to a piece of equipment that Stephen Hawking, Nobel-Prize winner Subrahmanyan Chandrasekhar, the UK's renowned scientist Arthur Eddington, and other black hole aficionados didn't have the luxury of playing with - the Large Hadron Collider (LHC). Located on the CERN campus, the LHC will be able to replicate, apparently, the formation of black holes in a controlled environment. This should allow us to see if the team's theory measures up (as long as the Earth doesn't collapse in on itself first).

Could the Case team's paper be the beginning of a new era in black hole research? The Director of Case's Center for Education and Research in Cosmology, Lawrence Krauss, thinks so. "From an external viewer's point, it takes an infinite amount of time to form an event horizon and that the clock for the objects falling into the black hole appears to slow down to zero," says Krauss. "This is one of the factors that led us to rethink this problem, and we hope our proposal at the very least will stimulate a broader reconsideration of these issues." And if Krauss is correct, it means that stars don't die and implode in the way that we think they do... they just fade away.

Check out the Case paper:
"Observation of Incipient Black Holes and the Information Loss Problem"