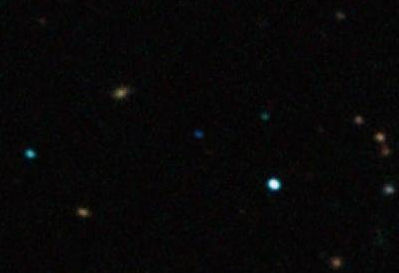 Astronomers say they have identified an astronomical body that is very probably a nomad planet – a free-floating planet that wanders through space without a parent star.

Nomad planets are thought to form either as normal planets that have been kicked out of their home systems, or as lone objects like the smallest stars or brown dwarfs. Possible examples of such objects have been found before, but without knowing their ages, it was not possible for astronomers to know whether they were really planets or brown dwarfs – “failed” stars that lack the bulk to trigger the reactions that make stars shine.

The new object, labeled CFBDSIR2149 (faint blue dot at center of image), is about 100 light-years from Earth. Its relative proximity, and the absence of a bright star very close to it, has allowed the team of astronomers to study it in great detail.

According to the team’s report, CFBDSIR2149 appears to be part of a nearby stream of young stars known as the AB Doradus Moving Group. The astronomers found the object in observations from the Canada-France-Hawaii Telescope and harnessed the power of ESO’s Very Large Telescope to examine it more closely.

The AB Doradus Moving Group is the closest such group to our Solar System. Its stars drift through space together and are thought to have formed at the same time. If the new object is associated with this moving group – and hence it is a young object – it is possible to deduce much more about it, including its temperature, mass, and what its atmosphere is made of. The astronomers concede that there remains a small probability that the association with the moving group is by chance.

The team’s statistical analysis of the object’s motion – its angular change in position across the sky each year – shows an 87 percent probability that the object is associated with the AB Doradus Moving Group, and more than 95 percent probability that it is young enough to be of planetary mass, making it much more likely to be a rogue planet rather than a small “failed” star. Given these factors, the team estimates the mass of the planet to be approximately 4-7 times the mass of Jupiter, with an effective temperature of approximately 430 degrees Celsius. The planet’s age, say its discoverers, would be the same as the moving group itself – 50 to 120 million years.

In some ways, the object provides astronomers with a preview of how exoplanets might be viewed when more powerful telescopes become available in the future. “Looking for planets around their stars is akin to studying a firefly sitting one centimeter away from a distant, powerful car headlight,” says Philippe Delorme (CNRS/Universite Joseph Fourier, France), lead author of a study documenting the mysterious object. “This nearby free-floating object offered the opportunity to study the firefly in detail without the dazzling lights of the car messing everything up.”

Delorme speculates that such nomad worlds could be common – perhaps as numerous as normal stars. “Further work should confirm CFBDSIR2149 as a free-floating planet,” he concludes. “This object could be used as a benchmark for understanding the physics of any similar exoplanets that are discovered by future special high-contrast imaging systems.”

Related:
Discuss this article in our forum
Hundreds of rogue stars found outside galaxy
Dark matter not so dark; may be peppered with rogue stars
Binary star has multiple orbiting planets
Milky Way has “billions” of habitable planets