You are here: Home › News › Space › “Extreme” astrophysical event likely cause of mysterious radio bursts
By Will Parker on July 4, 2013 in News, Space 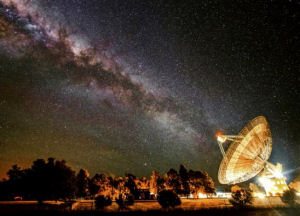 Mysterious bursts of radio waves detected on Earth may be coming from magnetars, say the scientists who first detected them. The international team of astronomers behind the discovery, writing in the journal Science, explain that the characteristics of the bursts indicate they come from sources billions of light years distant.

“A single burst of radio emission of unknown origin was detected outside our galaxy about six years ago but no one was certain what it was or even if it was real, so we have spent the last four years searching for more of these explosive, short-duration radio bursts. This paper describes four more bursts, removing any doubt that they are real,” explained team member Dan Thornton, from the University of Manchester. “The radio bursts last for just a few milliseconds and the furthest one that we detected was 11 billion light years away.”

The findings point to some extreme events involving large amounts of mass or energy as the source of the radio bursts. Matthew Bailes, a study co-author from the Swinburne University of Technology (Australia), thinks the origin of these explosive bursts may be from magnetic neutron stars known as magnetars. “Magnetars can give off more energy in a millisecond than our Sun does in 300,000 years and are a leading candidate for the burst,” he said.

The researchers say their findings will help shed light on the properties of space between the Earth and where the bursts occurred. Author Ben Stappers, from Manchester University, noted that astronomers are still not completely sure what makes up the space between galaxies. “We will be able to use these radio bursts like probes in order to understand more about some of the missing matter in the Universe. We are now starting to look for these bursts in real time.”