You are here: Home › Health › Mental Health › News › Energy poverty linked to cognitive deficits
By Will Parker on June 4, 2012 in Mental Health, News 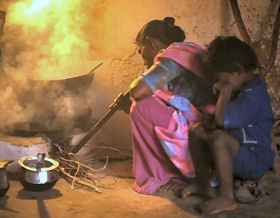 Researchers at the University of California, Riverside and Pitzer College say they have found children exposed to open-fire cooking in developing countries experience difficulty with memory, problem-solving and social skills. Past research identified numerous health risks to those exposed to smoke from open cooking fires, but this is the first time it has been associated with deficits in cognitive development. The researchers, Mary Gauvain at UC Riverside and Robert L. Munroe from Pitzer, have published their findings in the International Journal of Environmental Health Research.

Their research comes as international public and private agencies advocate, through the Global Alliance for Clean Cookstoves, the use of clean and efficient cooking stoves in the developing world. U.S. Secretary of State Hillary Clinton is among the alliance’s supporters because of the impacts of open-fire cooking on health and climate change.

Previous studies have shown that children’s exposure to carbon monoxide and toxins in smoke from open-fire cooking poses risks to immune systems and susceptibility to respiratory ailments, including pneumonia and changes to the lungs and other organs. Gauvain wondered if open-fire cooking could have anything to do with cognitive development and decided to look at our cognitive data in relation to cooking methods.

Gauvain and Munroe studied approximately 200 children aged 3 to 9 living in traditional communities in Belize, Kenya, Nepal and American Samoa. Two of the communities – Logoli in Kenya and Newars in Nepal – consistently used open-fire cooking with wood, dung or straw indoors. In American Samoa, cooking was done on kerosene stoves. Families in Belize were split almost evenly among those who cooked only with wood on open fires, those who used both open-fire and kerosene-stove cooking, and those who cooked nearly exclusively with kerosene stoves.

Gauvain and Munroe found that exposure to open-fire cooking, as opposed to cooking on kerosene stoves, was associated with both lower cognitive performance and less frequent structured play, regardless of culture, child age and educational level, and socioeconomic status.

While the researchers cannot say for certain that smoke from open-fire cooking causeslower cognitive performance, their results echo the findings of a 2008 study that found direct connections among toxins in the air, brain development and cognitive impairment. That study compared MRI scans of 9- and 10-year-old middle-class children living in Mexico City, where there are high levels of air pollution, and Polotitlán, a city in Mexico with low air-pollution levels.

Gauvain and Munroe said the fact that the negative effects of open-fire cooking were strongest for the youngest children, who spent more time in the home where the cooking took place. “Exposure to wood-burning stoves may be more damaging than people realize. It could have cognitive and behavioral effects. We’re trying to draw attention to the fact that the problem may be much broader in scope,” said Gauvain.

U.S. heads getting bigger
Mosquitoes use tai chi to fly through rain