You are here: Home › News › Developing World Antes Up In Greenhouse Game
By Will Parker on October 25, 2006 in News 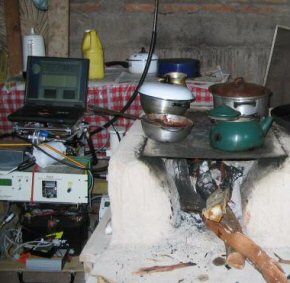 Reporting the results in the journal Environmental Science & Technology, the researchers said that the stoves in Honduras produced double the expected amount of smoke particles. “We expected field measurements to be different from lab measurements, and we suspected the amount of black carbon from these stoves would be higher than open burning, but we were surprised by how much,” Roden said.

It’s estimated that as many as 400 million cooking stoves – fueled by wood or crop residue – are in use daily worldwide. The sooty particles they produce are darker than those from grassland or forest fires and have a climate warming effect because they absorb solar energy and heat the atmosphere. As well as their effect on the climate, Roden said that smoke from cook stove fires is a major cause of respiratory problems, eye infections and tuberculosis. “Emissions from wood cook stoves affect the health of users – especially of women and children – neighborhood air quality, and global climate. Reducing these emissions, through the use of cleaner burning stoves and fuels, should have far-reaching benefits,” Bond added.

Roden agreed, but said that any new cook stoves; “must be well designed and properly tested. They must be built with local traditions and practices in mind and must be easy to use, or they may become expensive doorstops.”