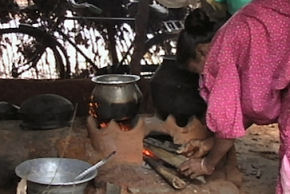 “Energy poverty is one of the biggest human welfare issues of our day,” says Hisham Zerriffi, who is presenting his research at the 2012 Annual Meeting of the American Association for the Advancement of Science. “We’re talking about more people who die each year from cooking than from malaria.”

Zerriffi says nearly half the world’s population is reliant on burning wood, animal waste, coal or charcoal to cook. “It is often women and children who suffer the most from indoor air pollution, and who carry the burden of collecting fuel to burn. Beyond the health and gender equity implications, burning biomass is also associated with environmental concerns such as carbon emissions and climate change,” he adds.

“We need to combine new technologies with smart policies,” Zerriffi says. “We need to help create viable markets, encourage households to switch to new stoves, and fix some of the gaps in funding – especially for those at the lowest end of the income scale. It’s a complicated problem because governments can’t afford to hand out improved cookstoves to a continually growing population, and the private sector needs to recover its costs so they can continue to distribute more stoves.”

When the private sector got into the cookstove business a few years ago, it looked as if this could be a successful solution. Today, these businesses are having trouble, Zerriffi says. According to him, the problem is that the majority of consumers who need this product are very poor with little disposable income for stoves. With this consumer base, businesses don’t have the additional resources needed to market the product and sustain their operations.

Using financing from carbon-offset programs to support the distribution of cleaner stoves has been proposed as one possible solution. Zerriffi’s colleague Michael Brauer is evaluating one such carbon credit-financed program in India. Brauer will measure health improvements, to what extent emissions relevant to both human health and climate change are being reduced, and whether the stoves are sustainable and accepted in the community. “There is great potential to dramatically improve people’s lives and reduce a major source of emissions related to climate change,” says Brauer, “but there is also the potential to squander lots of money and goodwill.”