You are here: Home › Animal Kingdom › News › Mosquitoes use tai chi to fly through rain
By Will Parker on June 5, 2012 in Animal Kingdom, News 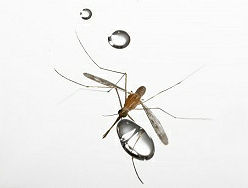 Using high speed video, researchers from Georgia Tech have observed how mosquitoes can fly through rain even though a single raindrop can weigh 50 times more than the insect. According to lead researcher David Hu, the technique of yielding to an incoming attack, rather than attempting to meet it with opposing force, enables the bugs to fly relatively unscathed through downpours.

To investigate, the research team constructed a flight arena consisting of a small acrylic cage covered with mesh to contain the mosquitoes but permit entry of water drops. They used a water jet to simulate rain stream velocity and observed the mosquitoes flying into the stream. All the mosquitoes survived their collisions.

It turns out that the mosquito hardly slows the raindrop down at all, and absorbs very little of its energy. Hu said that mosquitoes receive low impact forces from raindrops because the mass of mosquitoes causes raindrops to lose little momentum upon impact. “The collision force must equal the resistance applied by the insect. Mosquitoes don’t resist at all, but simply go with the flow.”

But surviving the collision is only half the battle. The insect then has to free itself from its watery transport before the droplet crashes it into the ground. Filming free-flying mosquitoes that were subjected to rain drops, the researchers found that upon impact the mosquito is adhered to the front of the drop for up to 20 body lengths.

“To survive, the mosquito must eventually separate from the front of the drop,” Hu said. “The mosquito accomplishes this by using its long legs and wings, whose drag forces act to rotate the mosquito off the point of contact. This is necessary; otherwise the mosquito will be thrown into the ground at the speed of a falling raindrop.”

“The most surprising part of this project was seeing the robustness this small flyer has in the rain,” co-researcher Andrew Dickerson added. “If you were to scale up the impact to human size, we would not survive. It would be like standing in the road and getting hit by a car.”

The findings, appearing in the Proceedings of the National Academy of Sciences, could be used to enhance the design and features of micro-airborne vehicles, which are increasingly being used by law enforcement and the military in surveillance and search-and-rescue operations.

Related:
Discuss this article in our forum
Watch a video of the mosquitoes getting pummeled
When Efficient Flight’s A Drag
Human-powered ornithopter flaps into record books
Bow To Your Insect Overlords!