You are here: Home › Mind and Brain › News › Rosemary’s curious psychoactive effects explored
By Will Parker on February 27, 2012 in Mind and Brain, News 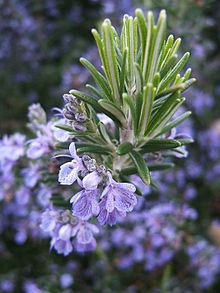 Recognized since ancient times for its medicinal properties, scientists at Northumbria University (UK) are now uncovering how rosemary (Rosmarinus officinalis) oil improves cognitive performance through its effect on mood.

Reporting their findings in Therapeutic Advances in Psychopharmacology, researchers Mark Moss and Lorraine Oliver detail how blood levels of a rosemary oil component correlate with improved human cognitive performance. Specifically, the researchers looked at the effects of 1,8-cineole (1,3,3-trimethyl-2-oxabicyclo[2,2,2]octane), one of the main components of rosemary essential oil.

Moss and Oliver assessed both cognitive performance and mood in a group of subjects who were exposed to varying levels of the rosemary aroma. Using blood samples to detect the amount of 1,8-cineole the participants had absorbed, the researchers applied speed and accuracy tests, and mood assessments, to judge the oil’s affects.

Intriguingly, the results indicate that the concentration of 1,8-cineole in the blood is related to an individual’s cognitive performance – with higher concentrations resulting in improved performance. The researchers stress that both speed and accuracy were improved, suggesting that the relationship is not describing a speed-accuracy trade-off.

The chemical also had an effect on mood, with the study noting a negative correlation between changes in contentment levels and blood levels of 1,8-cineole. This, say the researchers, suggests that rosemary affects subjective state and cognitive performance through different neurochemical pathways.

“Contentedness possessed a significant relationship with 1,8-cineole levels, and interestingly to some of the cognitive performance outcomes, leading to the intriguing proposal that positive mood can improve performance whereas aroused mood cannot,” said Moss.

1,8-cineole is a small, fat-soluble organic molecule that can readily cross the blood-brain barrier. It is found in many aromatic plants, including eucalyptus, bay, wormwood and sage in addition to rosemary.

1 Blue Sage and Rosemary 4" Organic Made in USA

2X Blue Sage and Rosemary 4" Organic Made in USA