You are here: Home › Mind and Brain › News › Sports brain injury may actually be an autoimmune phenomenon
By Will Parker on March 6, 2013 in Mind and Brain, News 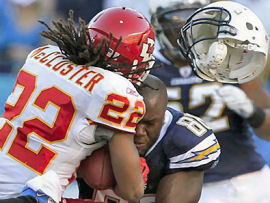 U.S. medicos have proposed a radical new way of thinking about concussions and sub-concussive hits to the head that are linked to neurological disorders later in life (including the much-publicized chronic traumatic encephalopathy). They suggest that the brain degeneration observed among professional football players could result from an out-of-control immune response, similar to that which multiple sclerosis patients experience. If so, the researchers believe that vaccines or drug therapies could be used to prevent the resultant cognitive degeneration.

Details of the investigation, conducted by researchers from the University of Rochester Medical Center and the Cleveland Clinic, appear as a study in the journal PLOS ONE.

“Our theory is plausible as an explanation for how routine head hits that come with playing football can lead to severe neuro-degeneration later in life,” said Rochester’s Jeffrey J. Bazarian, a co-author of the new study. “If others confirm this, it could present options with drugs that influence the immune response.”

Central to Bazarian’s new take on concussive impacts is the blood-brain barrier: the semi-permeable gate between the brain and bloodstream. When the barrier is working properly, it holds in proteins and molecules that bathe the brain and protect it from foreign substances. With blows to the head, however, the barrier opens slightly and allows some proteins to leak into the bloodstream.

Bazarian and his co-researchers found that S100B, a previously identified protein biomarker for traumatic brain injury, was present in varying degrees in the blood samples of the 67 football players after every game – even though none of them suffered a concussion. This, according to Bazarian, demonstrates that even the most routine hits have some impact on the blood-brain barrier.

For the purposes of this study, however, the team wanted to explore what happens afterS100B surges from the brain and enters the bloodstream. This was where they made an important finding – that the body views S100B as an enemy and begins to form antibodies against it as if it were a virus.

The researchers hypothesized that a build-up of antibodies would result in a more vigorous attack on S100B in the bloodstream. But in the process, they learned, some antibodies sneak back through the damaged blood-brain barrier to the brain and begin to harm the healthy brain cells that produced the S100B protein in the first place. This is analogous to a missile searching for a target, Bazarian explained, with some unintended targets eventually falling under friendly-fire.

The methods used to test the hypothesis involved each player giving blood samples before and after games. The researchers also monitored the number of hits each player sustained by viewing game films and conducting post-game interviews, and gave each player standard cognitive tests, pre-season and post-season.

The results showed that players with the most head hits also had the highest S100B levels and elevated levels of autoimmune antibodies. Players who often remained on the sidelines had significantly lower S100B levels. In addition, the blood samples predicted abnormalities seen in imaging tests, and correlated with observed cognitive changes.

Importantly, the study also showed that S100B accumulates in dendric cells, which regulate auto-immune responses. Therefore, the researchers reason, as the blood-brain barrier repeatedly opens during the football season, it could set the stage for a continuous autoimmune-type attack on the brain. A similar breakdown occurs in multiple sclerosis, when the body’s own immune system damages myelin sheaths around the brain.

“Although many scientists are actively investigating concussions in the United States right now, it’s been difficult to study the link between brain injury, blood-brain barrier damage, and the long-term risk of neuro-degeneration because of a lack of simple, non-invasive tools,” Bazarian said. He hopes that eventually S100B will be a tool for emergency rooms and other clinical settings to screen for concussions with a simple blood sample from a finger prick.