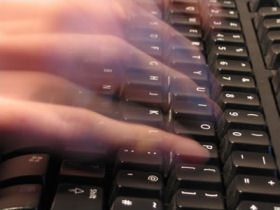 An intriguing new study in the journalPsychonomic Bulletin & Review shows there is a link between the meaning and interpretation of words and the letters they are composed of – a relationship the researchers have called the QWERTY effect.

The QWERTY effect was also evident when people judged the meanings of fictitious words like “pleek,” and was strongest in new words and abbreviations like “greenwash” and “LOL.”

In the past, language was only spoken and only subject to the constraints on hearing and speaking. Now that language is frequently produced by the fingers – typing and texting – it is filtered through the keyboard. The researchers say that as typing and texting become ubiquitous, these creation methods will shape the language they are designed to produce. In effect, with filtering through the keyboard, changes in the meaning of words can emerge.

The QWERTY effect challenges the traditional view that the meanings of words are independent of their forms, say the researchers. “People responsible for naming new products, brands, and companies might do well to consider the potential advantages of consulting their keyboards and choosing the ‘right’ name,” they conclude.