You are here: Home › Medicine › News › Nuke decontamination pill “highly effective”
By Will Parker on March 7, 2012 in Medicine, News 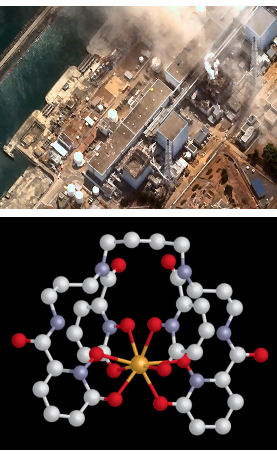 Rapid, mass decontamination following a nuclear reactor accident or terrorist “dirty bomb” attack may be in the offing with Berkeley Lab researchers reporting they have begun seeking FDA approval for trials of an orally administered decontamination agent.

The process of decontaminating the body of radioactive particles hasn’t advanced much in half a century, with only one chemical agent available. That compound, known as DTPA, is widely regarded as a relic from the Cold War and is only partially effective at removing radioactive elements from the body.

The lack of research in the area is somewhat surprising given that Japanese officials considered the evacuation of more than 30 million Tokyo residents following last year’s triple meltdown at the Fukushima nuclear reactor.

“With the expanding use of nuclear power and unfortunate possibility of nuclear weapon use, there is an urgent need to develop and implement an improved therapy for actinide contamination of a large population,” says Berkeley Lab scientist Rebecca Abergel. “We are now in the process of demonstrating that our actinide-specific decontaminating agents are ready for clinical development.”

“Since the biochemical properties of plutonium and iron are similar, we modeled our sequestering agents after the chelating unit found in siderophores,” explained the research leader Ken Raymond. Siderophores are small molecules secreted by bacteria to extract and solubilize iron.

The two best candidate HOPOs developed by the team are a tetradentate, which has four chelating arms, and an octadentate (pictured), which has eight chelating arms. The “arms” in this case are atoms with pairs of electrons available for covalent bonding with an actinide.

Each variant has its own merits, explains Abergel. “A single octadentate HOPO can form a full actinide complex and results in more total actinide excretion. However, it is easier for the smaller tetradentate HOPO to pass through biological membranes and access desired target sites in the body. Both warrant further development for emergency use in the case of a radiological event.”