You are here: Home › Medicine › News › Down syndrome may be reversible
By Will Parker on September 4, 2013 in Medicine, News 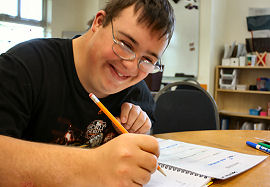 Scientists say they have identified a compound that dramatically bolsters learning and memory when given to mice with a Down syndrome-like condition. Given on the day of birth, the single-dose treatment appears to enable the cerebellum of the rodents’ brains to grow to a normal size.

Reporting their findings in Science Translational Medicine, the scientists caution that use of the compound, a small molecule known as a sonic hedgehog pathway agonist, has not been proven safe to try in humans.

Down syndrome is a condition that occurs when people have three, rather than the usual two, copies of chromosome 21. As a result of this “trisomy,” people with Down syndrome have extra copies of the more than 300 genes housed on that chromosome, which leads to intellectual disabilities (people with Down syndrome have a cerebellum about 60 percent of normal size), distinctive facial features, and other health effects. Since the condition involves so many genes, developing treatments for it is a formidable challenge,

The mice used in the experiments had many characteristics similar to those of people with Down syndrome, including relatively small cerebellums and difficulty learning and remembering how to navigate through a familiar space.

“We treated the Down syndrome-like mice with a compound we thought might normalize the cerebellum’s growth, and it worked beautifully. We were able to completely normalize growth of the cerebellum through adulthood with that single injection,” says researcher Roger Reeves, from the Johns Hopkins University School of Medicine.

But the research team went beyond measuring the cerebellums, looking for changes in behavior, too. The team tested the treated mice against untreated Down syndrome-like mice and normal mice in a variety of ways, and found that the treated mice did just as well as the normal ones on the water maze test.

Reeves says further research is needed to learn why exactly the treatment works, because their examination of certain cells in the hippocampus known to be involved in learning and affected by Down syndrome appeared unchanged by the sonic hedgehog agonist treatment. He speculates that the treatment improved learning by strengthening communication between the cerebellum and the hippocampus.

As for the compound’s potential to become a human drug, the problem, Reeves says, is that altering an important biological chain of events like sonic hedgehog would likely have many unintended effects throughout the body, such as raising the risk of cancer by triggering inappropriate growth. But now that the team has seen the potential of this strategy, they will look for more targeted ways to safely harness the power of sonic hedgehog in the cerebellum.

Related:
Discuss this article in our forum
Are cancers newly evolved species?
Stress During Pregnancy Linked To Autism
Autism, Asperger’s and Evolution