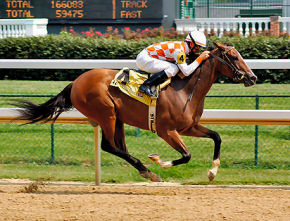 Irish researchers writing in the journal Nature Communications say that the original “speed gene” variant entered the equine Thoroughbred line from a single British mare about 300 years ago. The origin of the speed gene (known as the C type myostatin gene variant, first identified in 2010) was revealed by analyzing DNA from hundreds of horses, including DNA extracted from the skeletal remains of 12 celebrated Thoroughbred stallions born between 1764 and 1930.

“Changes in racing since the foundation of the Thoroughbred have shaped the distribution of speed gene types over time and in different racing regions,” explained Dr Emmeline Hill, senior author of the study and a genomics scientist at the University College Dublin. But the original, adds Hill, appeared when local British horse types were the preeminent racing horses, prior to the formal foundation of the Thoroughbred racehorse.

“The findings point to a British mare as the most likely single founder of the original speed gene because one of the lines of evidence from the research demonstrated that the prize stallions of the 17th and 18th centuries had two copies of the T type speed gene variant (T:T) which is linked to greater stamina,” said co-researcher Dr Mim Bower, from the University of Cambridge.

By comparing the diversity of the chromosomes around the C and T type gene variants researchers found only a single C type compared to 11 different T type gene variants, meaning that the speed gene entered the Thoroughbred just once. “The results show that the speed gene entered the Thoroughbred from a single founder, which was most likely a British mare about 300 years ago,” concluded Hill.