You are here: Home › Animal Kingdom › News › Gay insects are just confused, say scientists
By Will Parker on October 21, 2013 in Animal Kingdom, News 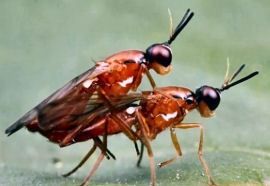 Homosexual behaviors in birds and mammals are thought to provide a number of evolutionary benefits, but scientists trying to find explanations for similar behavior in insects say a different imperative may be at work.

Reviewing past studies on some 110 species of male insects and spiders, researchers Inon Scharf (Tel Aviv University) and Oliver Martin (ETH Zurich) found that there is no clear benefit to homosexual behavior in insects. “It is unclear what role evolution plays in this curious situation. Like heterosexual behavior, it takes time and energy and can be dangerous – and it lacks the potential payoff of procreation,” said Scharf.

The costs, according to the researchers, can be considerable. “Homosexual mating is at least as risky as the heterosexual kind, expending sperm, wasting time that could go toward other activities, and boosting the risk of injury, disease, and predation,” they note in their study.

And yet, in some insect and spider species, up to 85 percent of males engage in homosexual behavior. The researchers say this is not because bugs directly benefit from the behavior, but because they mistake other males for females. “In the rush to produce offspring, bugs do not take much time to inspect their mates’ gender,” explained Scharf. “Almost 80 percent of the cases of homosexual behavior appeared to be the result of misidentification. In some cases, males carry around the scents of females they have just mated with, sending confusing signals to other males. In other cases, males and females look so similar to one another that males cannot tell if potential mates are female until after they have mounted them.”

Scharf and Martin’s study, published in Behavioral Ecology and Sociobiology, speculates that insects have not evolved to be more discriminating in their mating choices because the cost of rejecting an opportunity to mate with a female is greater than that of mistakenly mating with a male. “This explanation is supported by the fact that many species that exhibit homosexual behavior also mate with related species or inanimate objects, like beer bottles – indicating a general tendency toward misidentification,” Scharf said.

The researchers add that it is also possible that sexual enthusiasm in bugs is related to other evolutionarily beneficial traits. “Homosexual behavior may be genomically linked to being more active, a better forager, or a better competitor,” says Scharf. “So even though misidentifying mates isn’t a desirable trait, it’s part of a package of traits that leaves the insect better adapted overall.”