You are here: Home › Biology › News › Invasive plants can improve biodiversity, ecosystem health
By Will Parker on February 14, 2011 in Biology, News 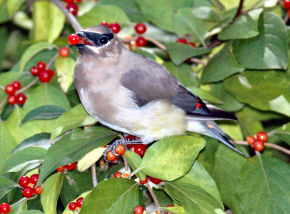 Scientists have found that human-introduced, invasive species of plants can – contrary to prevailing ideas – have positive effects on ecological communities. The research, published in the journal Diversity and Distributions, has wide implications for the way environmental managers respond to ecosystem maintenance.

“Among conservation biologists, ecologists, and managers, the default approach is to try to eliminate and root out non-native, invasive shrubs – anything that seems to change an ecosystem,” Penn State assistant professor Tomás Carlo said. “The fundamental goal is to return a natural area to its original, pristine state, with the native species occupying the dominant position in the community. But the problem is that most native communities already have been changed beyond recognition by humans, and many native species are now rare.”

Carlo and his co-researchers wanted to test whether certain well-established, invasive fruiting species have negative or positive effects on bird and fruiting-plant communities. “We wondered: Are we sometimes doing more harm than good when we eradicate plants that, despite being introduced recently, have formed positive relationships with native animals?”

To test this notion, Carlo sectioned off an area of central Pennsylvania known as the Happy Valley region, where honeysuckle – a non-native fruiting plant that is considered invasive – grows in abundance. They then assessed the abundance of bird species and fruiting plants – including honeysuckle – within the area.

After comparing their data with similar data from urban, agricultural, and forested areas, they determined that the abundance of honeysuckle predicted the numbers and diversity of birds within the region and even beyond the region. That is, the honeysuckle and bird communities had formed a relationship known as mutualism (how two or more species interact by benefiting mutually from each other’s existence).

“The abundance of fruit-eating birds in the Happy Valley region is linked to the abundance of honeysuckle,” Carlo explained. “Honeysuckle comprises more than half of all the fruits available in the landscape, and it benefits birds by providing them with a source of food in the fall. Meanwhile, birds benefit honeysuckle by dispersing the plant’s seeds across a wider geographical area, helping the species to occupy more and more territory in areas already affected by human activities. Returning this particular ecosystem to its honeysuckle-free state could harm many species of native birds that now seem to rely on honeysuckle as a major food source in the fall.”

The team also tested the honeysuckle’s influence, not just on birds, but on other species of fruiting plants. First, they grew native fruiting plants known as American nightshades in pots in a greenhouse. When the fruits were ripe on each plant, they then placed them into both honeysuckle-dense areas and areas area without honeysuckle but dominated by other native and non-native fruiting species. “We chose the American nightshade because it is native and common in the Happy Valley region,” Carlo said. “Also, it is easy to manipulate experimentally, and its fruits are eaten – and thus dispersed – by native birds.”

The study notes that in Pennsylvania, there are now three to four times more fruit-eating birds such as robins and catbirds than there were just 30 years ago, especially in landscapes of high human presence. Carlo says that scientists should conclude that, while some invasive, human-introduced plants are definitely problematic, others could serve to restore ecological balance by providing essential food resources to native migratory birds that populate areas affected by humans. “Invasive species could fill niches in degraded ecosystems and help restore native biodiversity in an inexpensive and self-organized way that requires little or no human intervention,” Carlo suggested.

Carlo also lamented that attempts to clear areas of invasive species were often a waste of time and tax dollars. He explained that when managers and agencies attempt to eradicate an invasive plant from a particular ecosystem, the species often ends up growing back anyway. “Nature is in a constant state of flux, always shifting and readjusting as new relationships form between species, and not all of these relationships are bad just because they are novel or created by humans,” Carlo said. “We need to be more careful about shooting first and asking questions later… we should be asking: Are we responding to real threats to nature or to our cultural perception and scientific bias?”