Survival Of The Cutest 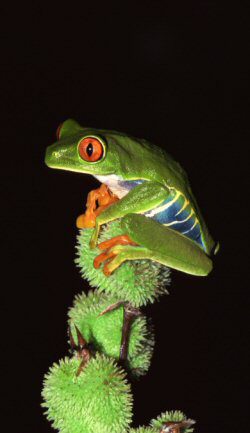 The protection of endangered species is the core mission for many conservation agencies, yet invariably it's the same pleasing-to-the-eye creatures that hog the limelight. Sumatran Tigers and baby Harp Seals push the right buttons with the public, but would promotional images of an endangered Antigua Ground Lizard or Wyoming Toad elicit the same response? Probably not, with new research predicting that only the most aesthetically pleasing creatures may survive humankind's continued reshaping of the Earth.

A species is considered to be endangered if they are few in number or shown to be threatened by changing environmental or predation constraints. This may mean that species are spread so sparsely that it becomes difficult to find mates, or, that there is an imbalance in the food chain; both examples leading to a downward trend in biodiversity. Some would argue, however, that species are continually becoming extinct, and that it's just a natural aspect of the evolutionary process, and, therefore, nothing to be concerned about. But ever since humans began their amble across the face of the Earth some 100,000 years ago, extinctions have increased significantly.

This first human diaspora represents what is known as "phase one" of an identifiable extinction period (the Holocene extinction event), where humans have disrupted natural ecosystems through disease and hunting in areas they had not previously inhabited. "Phase two" began much more recently, around 10,000 years ago, in tandem with the development of agriculture and subsequent technologies. These two phases mark the beginning of the extinction event that we are now witnessing.

It's dubbed the Holocene extinction event because recent mass die-offs are comparable to early prehistoric mass extinctions that occurred as a result of impact events, tectonic shifts and volcanic activity. It's come about thanks to human interventions, like the destruction of natural habitats, the introduction of foreign species, production of greenhouse gases and overexploitation of species. The World Conservation Union says that approximately 7,500 animals are currently considered endangered. But while there's no shortage of endangered animals, most people, if asked to name some, could probably only come up with a half-dozen of the usual suspects (usually including tigers, pandas and whales). Why are we so myopic when it comes to the other creatures that are disappearing?

Conservation biologists currently researching this and related questions put it down to a human proclivity to aesthetic values associated with certain animals - a "cuteness" factor, in other words. David Stokes, a conservation biologist at the University of Washington, focused on penguins in his study, finding that the penguins most popular with the public are those displaying warm colors such as red, orange or intense yellow on the upper body, head and neck. But Stokes says that penguins have it relatively easy compared with other species, whose looks don't seem to resonate as widely with the public. "Penguins are lucky because they are popular with people, especially right now. But that's not true of 99.9 percent of the species out there," says Stokes. "Even the penguin species I found to be among the least appealing to people are tourist attractions."

The success of feature animations and documentaries such as Happy Feet and March Of The Penguins, aside from confirming Stokes' conclusion that we are obsessed with penguins, also shows that humans have a tendency to anthropomorphize nature, and in ways that make animals appear either good or evil (Disney animations being a prime example). Perhaps these depictions also influence how we weigh up the worth of an animal. Stokes says that we tend to favor animals with particular characteristics, especially adult animals that retain baby-like features (neoteny), such as large eyes or a big head, rather than the; "millions of insects and countless slimy invertebrates that occupy the oceans." To a certain degree this must be true, or why would conservation campaigns play the cuteness card when trying to attract donations?

But are conservationist groups shooting themselves in the foot? By only using human-friendly species of animals in their campaigns they may be inadvertently downplaying the enormous rate of extinction that is occurring right under the public's nose. Sure, the volunteers and organizers who doggedly hunt down donations to fund conservation research are to be admired, but perhaps the time is ripe for a change in PR strategy. Maybe it's time that the public was made aware about the plight of the Iowa Pleistocene Snail, or the James Spinymussel, because each is just as necessary to their particular ecosystems as the wide-eyed Cape Mountain Zebra is to its. If an audience can listen to Al Gore discuss the science of climate change for a couple of hours, anything's possible. Right?

But Stokes' main point is the responsibility that each of us has toward natural environments that we have become largely dislocated and independent from, and that these responsibilities should rise above how cute or beautiful we find a species. "The work pretty conclusively shows there is a large difference of appeal among organisms, even among closely related organisms," says Stokes. "For different kinds of organisms, different qualities seem to cause differences of appeal." Stokes cites some clear examples where aesthetic qualities have, for no other observable reason, overridden environmental priorities. He relates how the introduction of mountain goats to Olympic National Park in Washington State led to the destruction of park ecosystems, but, amazingly, the goats have not been removed because of their popularity with the public. Stokes also gives an account of how conservationists went about trying to eradicate the foreign English ivy from public lands, with their attempts ultimately stymied by the persistence of home owners to use the vines as an attractive addition to their gardens.

The message is that we humans need to get over our preference for the aesthetic and become more aware of the necessary role that each animal plays in its natural habitat. "We do have these big differences in how we feel about living things," says Stokes, "and these feelings are going to play a big role in what we choose to conserve." Perhaps conservationist publicity campaigns aimed at educating the public about the extent of the endangered species problem, rather than pushing our cute buttons, would be a good start.

Related articles:
Animals On Drugs
Was A Tripping Chimp The Missing Link?