You are here: Home › Biology › News › Return of wolves triggers renaissance in Yellowstone ecosystem
By Will Parker on December 22, 2011 in Biology, News 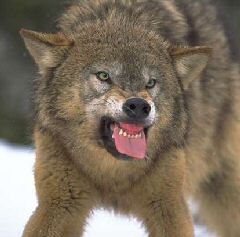 Fifteen years after the return of wolves to Yellowstone National Park a beautifully revitalized ecosystem is emerging. Oregon State University researchers working at the park say their observations provide “persuasive” evidence of the importance of top predators to biodiversity and ecosystem health.

“Yellowstone increasingly looks like a different place,” said William Ripple, lead author of a new study examining the park’s health. “These are still the early stages of recovery, and some of this may still take decades. But trees and shrubs are starting to come back and beaver numbers are increasing. The signs are very encouraging.” Ripple’s study appears in the journalBiological Conservation. The study documents the myriad of changes that have taken place since wolves were restored to Yellowstone after being extirpated in the 1920s.

Key observations in the study include:

The new study adds to others that underscore the importance of top tier predators in all ecosystems. “The wolves have made a major difference in Yellowstone,” concluded co-researcher Robert Beschta. “Predation and predation risk associated with large predators appear to represent powerful ecological forces, capable of affecting the interactions of numerous animals and plants, as well as the structure and function of ecosystems.”