You are here: Home › News › Nanotronics within reach with creation of molecule-sized diode
By Will Parker on October 15, 2009 in News 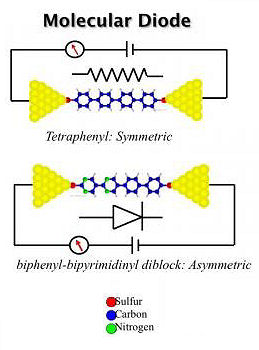 Arizona State University biodesigner N.J. Tao has found a way to make a key electrical component on a phenomenally tiny scale. The single-molecule diode created by Tao and his fellow researchers is described in this week’s Nature Chemistry.

In the electronics world, diodes are ubiquitous and are essential ingredients for the semiconductor industry. Making components including diodes smaller, cheaper, faster and more efficient has been the holy grail of an exploding electronics field, now probing the nanoscale realm.

Diodes allow current to flow in one direction around an electrical circuit but not the other. For a molecule to perform this feat, Tao explains, it must be physically asymmetric, with one end capable of forming a covalent bond with the negatively charged anode and the other with the positive cathode terminal.

The new study compares a symmetric molecule with an asymmetric one, detailing the performance of each in terms of electron transport. The idea of surpassing silicon limits with a molecule-based electronic component has been around for some time. “Theoretical chemists Mark Ratner and Ari Aviram proposed the use of molecules for electronics like diodes back in 1974,” Tao says. “People around world have been trying to accomplish this for over 30 years.”

Most efforts to date have involved many molecules. Only very recently have serious attempts been made to surmount the obstacles to single-molecule designs. One of the challenges is to bridge a single molecule to at least two electrodes supplying current to it. Another challenge involves the proper orientation of the molecule in the device. “We are now able to do this – to build a single molecule device with a well defined orientation,” Tao says. The technique developed by Tao’s group relies on a property known as AC modulation. “Basically, we apply a little periodically varying mechanical perturbation to the molecule,” said Tao. “If there’s a molecule bridged across two electrodes, it responds in one way. If there’s no molecule, we can tell.”

Tao’s team used conjugated molecules, in which atoms are stuck together with alternating single and multiple bonds. Such molecules display large electrical conductivity and have asymmetrical ends capable of spontaneously forming covalent bonds with metal electrodes to create a closed circuit.

“I think it’s exciting because we are able to look at a single molecule and play with it,” Tao says. “We can apply a voltage, a mechanical force, or optical field, measure current and see the response. As quantum physics controls the behaviors of single molecules, this capability allows us to study properties distinct from those of conventional devices.”

Tao is also examining the mechanical properties of molecules, for example, their ability to oscillate. Binding properties between molecules make them attractive candidates for a new generation of chemical sensors. “I am interested in molecular electronics not because of their potential to duplicate today’s silicon applications,” Tao says. Instead, he believes molecular electronics will benefit from unique electronic, mechanical, optical and molecular binding properties that set them apart from conventional semiconductors.