You are here: Home › News › Visible light data network under development
By Will Parker on October 7, 2008 in News 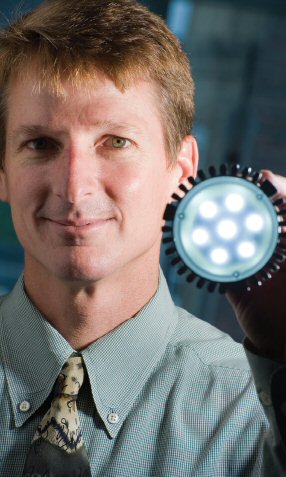 The next generation of wireless communications technology will use visible light instead of radio waves, with data piggybacking on interior lighting systems which researchers say will offer both greater speed and better security than today’s radio networks. Boston University’s College of Engineering (BU) is developing the “smart lighting” system using low-power light emitting diodes (LEDs) that can be switched on and off so rapidly that the change is imperceptible to the human eye.

“Imagine if your computer, iPhone, TV, radio and thermostat could all communicate with you when you walked in a room just by flipping the wall light switch and without the usual cluster of wires,” said BU Engineering Professor Thomas Little (pictured). “This could be done with an LED-based communications network that also provides light – all over existing power lines with low power consumption, high reliability and no electromagnetic interference. Ultimately, the system is expected to be applicable from existing illumination devices, like swapping light bulbs for LEDs.”

Professor Little is part of the Smart Lighting Engineering Research Center, an $18.5 million, multi-year National Science Foundation program awarded to Boston University, Rensselaer Polytechnic Institute and the University of New Mexico (UNM) to develop the optical communication technology that would make an LED light the equivalent of a WiFi access point.

Rensselaer and UNM will work on creating novel devices along with systems applications to better understand the proliferation of smart lighting technologies plus materials needed for wireless devices to interface with the network. Boston University researchers will focus on developing computer networking applications, specifically the solid state optical technology that will form the network’s backbone.

“This is a unique opportunity to create a transcendent technology that not only enables energy efficient lighting, but also creates the next generation of secure wireless communications,” Professor Little explained. “As we switch from incandescent and compact florescent lighting to LEDs in the coming years, we can simultaneously build a faster and more secure communications infrastructure at a modest cost along with new and unexpected applications.”

With widespread LED lighting, a vast network of light-based communication becomes easily achievable. A wireless device within sight of an enabled LED could send and receive data though the air – initially at speeds in the 1 to 10 megabit per second range – with each LED serving as an access point to the network. Such a network would have the potential to offer users greater bandwidth than current radio technology. Moreover, since this white light does not penetrate opaque surfaces such as walls, there is a higher level of security, as eavesdropping is not possible. LED lights also consume far less energy than radio technology, offering the opportunity to build a communication network without added energy costs and reducing carbon emissions over the long term.

Interestingly, the technology is not limited to indoor lights; its first real test may very well come outdoors, in the automotive industry. “This technology has many implications for automobile safety,” Professor Little said. “Brake lights already use LEDs, so it’s not a stretch to outfit an automobile with a sensor that detects the brake lights of the car in front of it and either alerts an inattentive driver or actively slows the car.”

2" X 2" Optical Glass Triangular Prism For Educational Or Photography Use, To Re