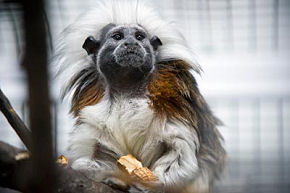 Music is one of the surest ways to influence human emotion, but non-human primates scarcely respond to our music, and instead prefer silence. But researchers from the University of Wisconsin-Madison have found that monkeys will respond to “monkey music,” 30-second tunes composed using the sonic attributes of actual monkey calls.

Writing in the journal Biology Letters, researcher Charles Snowdon explains how the music was inspired by the sounds that tamarin monkeys make to convey two opposite emotions: threats and/or fear, and affiliation, a friendly, safe and happy condition.

Snowdon says the project began with an inquiry from David Teie, a celloist with the National Symphony Orchestra: “Had Snowdon ever tested the effects of music on monkeys?” When Teie listened to recordings made in Snowdon’s monkey colony at the psychology department at UW-Madison, he readily discerned the animal’s affective state, Snowdon says. “He said, ‘This is a call from an animal that is very upset; this is from an animal that is more relaxed.’ He was able to read the emotional state just by the musical analysis.”

Teie composed the monkey music using specific features he noticed in the monkeys’ calls, such as rising or falling pitches, and the duration of various sounds. Monkeys are not the only ones who use musical elements to convey emotional content in speech. Studies show that babies that are too young to understand words can still interpret a long tone and a descending pitch as soothing, and a short tone as inhibiting.

“We use legato (long tones) with babies to calm them,” Snowdon explains. “We use staccato to order them to stop. Approval has a rising tone, and soothing has a decreasing tone. We add musical features to speech so it will influence the affective state of a baby. If you bark out, ‘PLAY WITH IT,’ a baby will freeze. The voice, the intonation pattern, the musicality can matter more than the words.”

For five minutes after hearing fear music, the monkeys displayed more symptoms of anxiety and increased their movement. In contrast, monkeys that heard “affiliative” music reduced their movements and increased their feeding behavior – both signs of a calming effect. “People have looked at animal communication in terms of conveying information – ‘I am hungry,’ or ‘I am afraid.’ But it’s much more than that. These musical elements are inducing a relatively long-term change in behavior of listeners. The affiliative music is making them calmer; they move less, eat and drink at a higher rate, and show less anxiety behavior” said Snowdon.

This change in behavior suggests that for cotton-top tamarins, communication is about much more than just information. “I am not calling just to let you know how I am feeling, but my call can also stimulate a similar state in you,” Snowdon says. “That would be valuable if a group was threatened; in that situation, you don’t want everybody being calm, you want them alert.”

The similarities in communications between monkeys and people suggest deep evolutionary roots for the musical elements of speech, Snowdon says. “The emotional components of music and animal calls might be very similar, and from an evolutionary perspective, we are finding that the note patterns, dissonance and timing are important for communicating affective states in both animals and people.”