You are here: Home › News › Guitarists’ brains synchronized
By Will Parker on March 17, 2009 in News 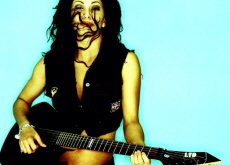 When guitarists play along together it isn’t just their instruments that are in time – their brain waves are too, say researchers who have been analyzing electroencephalography (EEG) readouts from pairs of guitarists. Published in the journal BMC Neuroscience, the research has wider implications for how our brains interact when we do.

The scientists involved in the study, from the Max Planck Institute for Human Development in Berlin and the University of Salzburg, recorded brain electrical activity in eight pairs of guitarists while each played a short jazz-fusion melody. The guitarists played the piece together up to 60 times while the EEG picked up their brain waves via electrodes on their scalps.

The researchers noted that similarities in the musicians’ brainwaves’ phase increased significantly: first when listening to a metronome beat in preparation; and secondly as they began to play together. The brains’ frontal and central regions showed the strongest synchronization patterns, as the researchers expected. However, the temporal and parietal regions also showed relatively high synchronization in at least half of the pairs of musicians. The researchers speculate that these regions may be involved in processes supporting the coordinated action between the players.

“Our findings show that interpersonally coordinated actions are preceded and accompanied by between-brain oscillatory couplings,” says researcher Ulman Lindenberger. The results don’t show, however, whether this coupling occurs in response to watching each others’ movements and listening to each others’ music, or, whether the brain synchronization takes place first and causes the coordinated performance.

Related:
Sex and the schizoid factor
The Rhythm (And Melody?) Of Life
This Is Your Brain On Jazz
Musicians’ brains optimized to identify emotion