You are here: Home › News › Space › Scientists propose test run for nuking asteroid
By Will Parker on March 10, 2013 in News, Space 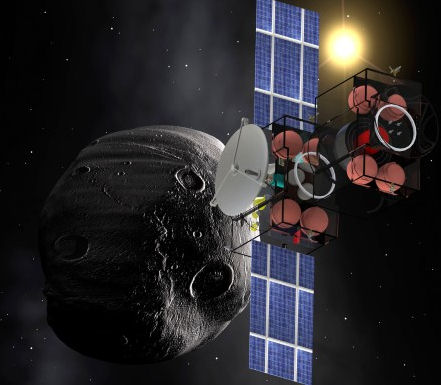 After five years of work, a team of scientists from Iowa State University are proposing a $500 million test launch of an asteroid interception system. Led by Bong Wie, of the university’s Asteroid Deflection Research Center, the team will be presenting their research at NASA’s Technology Day on the Hill, next month in Washington, D.C.

Wie says recent events have reminded everyone of the very real threat of asteroid impacts. “There was the 15-meter meteor that exploded over Russia and on that same day, the 45-meter asteroid DA14 passed within 25,000 kilometers of Earth. DA14 was a serious near miss,” he said. “If that impact had happened, it would have been the equivalent of 160 Hiroshima nuclear bombs.”

To date, Wie and his team have been working with data generated by computer simulations. But he says it’s time to integrate the necessary technology, build an unarmed prototype satellite and launch an actual test to see if a target asteroid can be hit.

NASA have already carried out a similar mission, crashing a probe into the comet Tempel 1. But Tempel 1 was significantly larger (8km by 6km) than the asteroids Wei wants to target. “[NASA] have done that with a large comet,” Wie said, “but not with a 300-meter or a 50-meter asteroid.”

Wie’s team believes it will take a one-two nuclear punch to break an asteroid into harmless pieces. Their plan involves:

“The overall effect of an explosion under the surface is 20 times larger than an explosion on the surface,” Wie explained, adding that the asteroid chunks would spread into a large debris cloud. “By the time Earth reached the cloud, less than 0.1 percent of the chunks would enter the atmosphere. And those should only be 5-meter pieces that aren’t likely to do much harm.”

Wie is adamant that the time for talk is over and a test mission is urgently needed. “It is time to develop a plan and demonstrate this concept. We have all the technology,” he said. “We don’t need anything new. But we need to engineer, integrate and assemble these technologies. And we need practice.”

Related:
Discuss this article in our forum
Tunguska Revisited
Ancient Buddhist statue, filched by Nazis, was carved from meteorite
Asteroid belts’ location critical for evolution of complex life
New evidence that comets may have seeded life on Earth