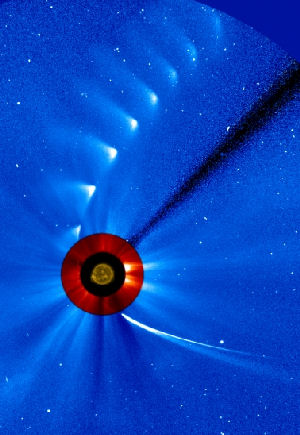 After several days of continued observations, NASA scientists still don’t know whether the bright spot seen moving away from the Sun was a cloud of dust or the remnant nucleus of Comet ISON, but they conclude that whatever it was has likely now disintegrated completely.

Comet ISON, which began its journey from the Oort Cloud some 3 million years ago, made its closest approach to the Sun on November 28. The comet was visible in telescopes for much of it journey, only disappearing from view when it rounded behind the Sun. Disappointingly, the comet failed to reappear when expected, leading many scientists to surmise that the comet had disintegrated during its close encounter. However, something did reappear some time later – though it was significantly less bright.

Whether that spot of light was a cloud of dust that was once the comet, or the comet nucleus (a small ball of its original, icy material), is still unclear. Whatever the case, NASA now says that as of Dec. 1, there was no nucleus left. To confirm this, NASA plan detailed observations later in the month using the Hubble Space Telescope.

Related:
Discuss this article in our forum
“I’m back!” Comet ISON hangs on in there
Dude, where’s my comet?
Thanksgiving close encounter looms for comet ISON