You are here: Home › News › Tunguska Revisited
By Will Parker on December 19, 2007 in News 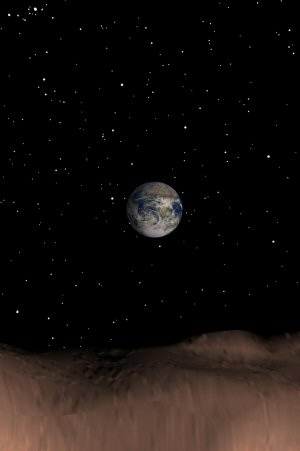 The huge forest devastation at Tunguska a century ago in Siberia may have been caused by an asteroid only a fraction as large as previously published estimates, Sandia National Laboratories supercomputer simulations suggest.

“The asteroid that caused the extensive damage was much smaller than we had thought,” says Sandia’s Mark Boslough. “That such a small object can do this kind of destruction suggests that smaller asteroids are something to consider. Their smaller size indicates such collisions are not as improbable as we had believed. We should be making more efforts at detecting the smaller ones than we have till now.”

The new simulation of the impact that occurred on June 30, 1908, shows that the center of mass of an asteroid exploding above the ground is transported downward at speeds faster than sound taking the form of a high-temperature jet of expanding gas. This causes stronger blast waves and thermal radiation pulses at the surface than would be predicted by an explosion limited to the height at which the blast was initiated.

“Our understanding was oversimplified,” says Boslough, “We no longer have to make the same simplifying assumptions, because present-day supercomputers allow us to do things with high resolution in 3-D. Everything gets clearer as you look at things with more refined tools.”

The new interpretation also accounts for the fact that winds were amplified above ridgelines where trees tended to be blown down, and that the forest at the time of the explosion, according to records, was not healthy. Thus previous scientific estimates had overstated the devastation caused by the asteroid, since topographic and ecologic factors contributing to the result had not been taken into account. “There’s actually less devastation than previously thought,” says Boslough, “caused by a far smaller asteroid.”

The simulation, detailed in the International Journal of Impact Engineering, showed that the material of an incoming asteroid is compressed by the increasing resistance of Earth’s atmosphere. As it penetrates deeper, the increasingly resistant atmospheric wall causes it to explode as an airburst that precipitates the downward flow of heated gas. Because of the additional energy transported toward the surface by the fireball, what scientists had thought to be an explosion between 10 and 20 megatons was more likely only three to five megatons.