On its first Martian day, the rover has been self-checking its health and so far all activities appear to be completely nominal. Approximately five megabytes of data were successfully relayed back to Earth from NASA’s Mars Odyssey orbiter during its overpass today.

Activities planned for the mission’s approximately one-month characterization activity phase include deploying Curiosity’s high-gain antenna, collecting science data from Curiosity’s Radiation Assessment Detector and Rover Environmental Monitoring Station instruments, and obtaining additional imagery. The mission’s characterization activity phase is design to learn how all Curiosity’s subsystems and instruments are functioning after landing and within the environment and gravitational field of Mars. 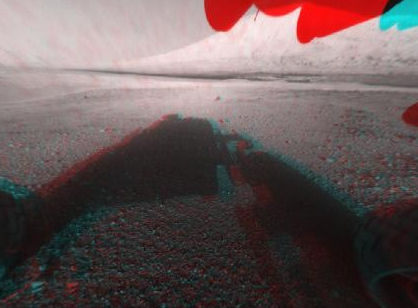 The above image shows a 3-D view in front of the Curiosity rover. The image was made from a stereo pair of Hazard-Avoidance Cameras on the front of the rover. Mount Sharp, a peak that is about 5.5 kilometers high, is visible rising above the terrain, though in one “eye” a box on the rover holding the drill bits obscures the view. 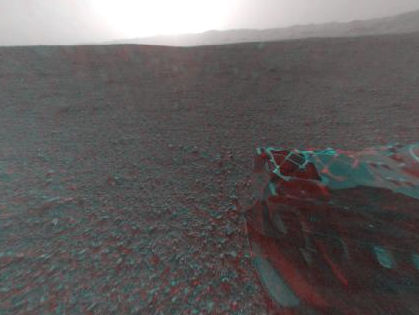 The above image is a 3-D view behind the Curiosity rover. Part of the rim of Gale Crater (about the size of Connecticut and Rhode Island combined) stretches from the top middle to the top right of the image. One of the rover’s wheels can be seen at bottom right. The bright spot is saturation from the sun. 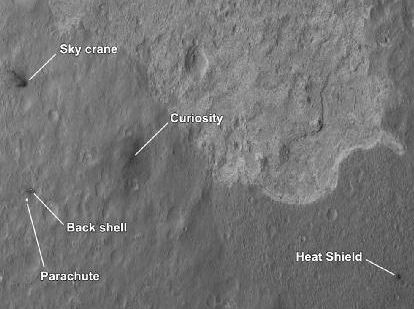 The four main pieces of hardware used during the Curiosity rover’s descent were spotted by the Mars Reconnaissance Orbiter. The large, reduced-scale image points out the strewn hardware: the heat shield was the first piece to hit the ground, followed by the back shell attached to the parachute, then the rover itself touched down, and finally, after cables were cut, the sky crane flew away to the northwest. Relatively dark areas in all four spots are from disturbances of the bright dust on Mars, revealing the darker material below the surface dust. Around the rover, this disturbance was from the sky crane thrusters, and forms a bilaterally symmetrical pattern.