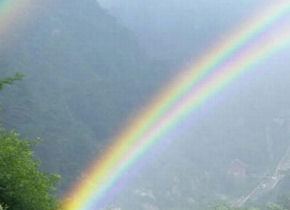 Computer simulations have allowed scientists to identify the curiously named “burgeroid” raindrop as being responsible for a rare optical phenomenon known as the twinned rainbow. Unlike the more common double-rainbow, which consists of two separate and concentric rainbow arcs, the elusive twinned rainbow appears as two rainbows arcs that split from a single base rainbow.

Even though the interaction of sunlight with small water drops has been studied since the days of Aristotle, the often complex behavior and appearance of rainbows has never been fully understood. “Everyone has seen rainbows, even double-rainbows, and they continue to fascinate the scientific community,” said Dr. Wojciech Jarosz, co-author of a new paper explaining the twinning effect. “Sometimes, when the conditions are just right, we can observe extremely exotic rainbows, such as a twinned rainbow. Until now, no one has really known why such rainbows occur.”

Jarosz, a scientist at Disney Research in Z�rich, and co-researchers from UC San Diego, Universidad de Zaragoza, and Horley (UK) studied virtual rainbows in simulation, experimenting with the physical shape of water drops and their interactions with both the particle and wave-nature of light. The key to the twinned rainbow mystery, Jarosz said, is the combination of different sizes of water drops falling from the sky.

“Previous simulations have assumed that raindrops are spherical. While this can easily explain the rainbow and even the double rainbow, it cannot explain the twinned rainbow,” he said. “Real raindrops flatten as they fall, due to air resistance, and this flattening is more prominent in larger water drops. Such large drops end up resembling the shape of hamburgers, and are therefore called ‘burgeroids.'”

The team developed software able to reproduce these conditions in simulation and the results matched, for the first time, twinned rainbows seen in photographs. The discovery, says Jarosz, was unintentional. “Initially the goal was to better depict rainbows for animated movies and video games and we thought rainbows were pretty well understood. Along the way we discovered that science and current simulation methods simply could not explain some types of rainbows. This mystery really fueled our investigations.”

The researchers see potentially wider application for their simulation beyond computer graphics, speculating that accurate models of such atmospheric phenomena could advance the science of meteorology. The findings are being presented today at SIGGRAPH 2012, the International Conference on Computer Graphics and Interactive Techniques at the Los Angeles Convention Center.