You are here: Home › News › Physics › Banking regulations could create financial chaos, say physicists
By Will Parker on August 10, 2012 in News, Physics 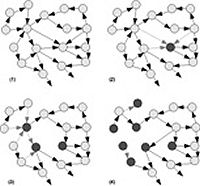 Imposing minimal capital levels for banks in an effort to stabilize the banking sector will not prevent insolvency and may lead to even greater financial chaos, say the creators of a new theoretical framework for bank stability. According to physicists Joo da Cruz and Pedro Lind from Lisbon University, Portugal, current regulatory measures could instead lead to larger crises and a widespread banking system collapse. A paper explaining their work appears in the European Physical Journal B.

For their research, the authors created a model of banks’ behavior to assess the conditions needed to avoid avalanches of insolvent banks. The model is based on a physical system of particles representing how banks are attracted to each other in order to exchange “economic energy.” They then applied the credit risk models used as the theoretical foundation for bank stability (known as the Merton-Vasicek model) to these particles.

Predictably, the researchers observed that insolvency results in a break of all the bank’s connections. As a result, it affects the “economic energy” of all its neighbors. Due to the interplay between banks, the effect of a single insolvency is thus capable of triggering an avalanche in the banking system.

But the model also showed that with an increase in the minimum capital level, the risk of large crashes is only reduced if the number of banks in the system remains fixed. The authors posit, however, that it is more realistic that banks will adjust to preserve their current levels of business and start forming new links with other banks.

The crucial factor then, the paper argues, is this formation of new links to create growth. From this, the authors conclude that raising capital requirements could have the opposite effect of making large avalanches – and therefore larger crises – more probable.

Related:
Discuss this article in our forum
Capitalism on the couch: psychoanalyzing the credit crisis
Boffins take aim at finance bubbles
Poker paradox: the more hands you win, the more money you lose
Risky business and a woman’s touch