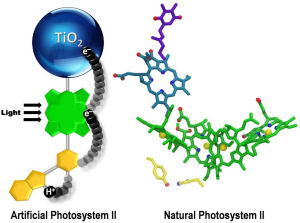 Putting together the chemical reactions that make photosynthesis happen has proven harder than scientists initially thought, but in a new paper in Nature Chemistry, Arizona State University (ASU) researchers describe the breakthroughs they have made toward perfecting a functional artificial leaf.

The researchers hope their work will one day allow the inexpensive production of hydrogen by using solar energy to convert water into hydrogen and oxygen – ushering in the much talked about “hydrogen economy.”

To investigate, the researchers took a closer look at how nature had overcome a related problem in the part of the photosynthetic process where water is oxidized to yield oxygen.

The team then designed an artificial relay based on the natural one and were rewarded with a major improvement.

Seeking to understand what they had achieved, the team then looked in detail at the atomic level to figure out how this might work. They used X-ray crystallography and magnetic resonance spectroscopy techniques to determine the local electromagnetic environment of the electrons and protons participating in the relay, and identified a unique structural feature of the relay. This was an unusually short bond between a hydrogen atom and a nitrogen atom that facilitates the correct working of the relay.

Interestingly, they also found subtle magnetic features of the electronic structure of the artificial relay that mirrored those found in the natural system. The discovery is important as scientists refine the artificial leaf approach to sustainably harnessing the solar energy needed to provide the food and fuel that human are increasingly demanding.