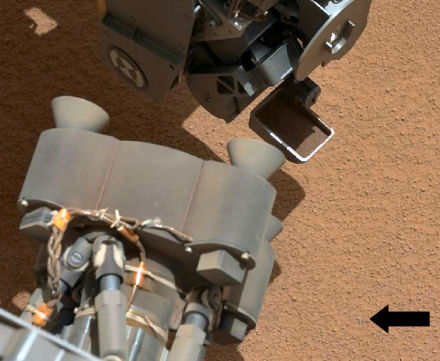 A mysterious bright object lying on the Martian surface has delayed the Curiosity rover’s soil sampling activities until mission control can identify the object. NASA said Curiosity’s first scooping activity appeared to go well but the rover team decided to refrain from using the rover’s robotic arm any further due to concerns the object on the ground might be a piece of metal from the rover itself.

Instead of arm activities during the 62nd Martian day of the mission, Curiosity is acquiring additional imaging of the object to aid the team in identifying the object and assessing the possible impact, if any, to further sampling activities.

Curiosity’s main activity in the 62nd sol of the mission (Oct. 8, 2012) was to image a small, bright object on the ground using the Remote Micro-Imager of the Chemistry and Camera (ChemCam) instrument.

The rover team’s assessment is that the bright object is something from the rover, not Martian material. It appears to be a shred of plastic material, likely benign, but it has not been definitively identified.

To proceed cautiously, the team is continuing the investigation for another day before deciding whether to resume processing of the sample in the scoop. Plans include imaging of surroundings with the Mastcam.