You are here: Home › News › Space › Curiosity zaps first Martian rock
By Will Parker on August 20, 2012 in News, Space 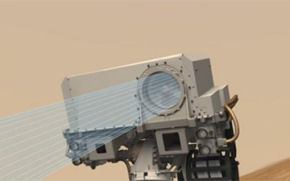 The rover Curiosity has zapped a fist-sized Martian rock with its laser, producing a cloud of ionized plasma that will be analyzed by Curiosity’s spectrometers.

The rock – christened “Coronation” by NASA scientists – was subjected to 30 laser pulses over 10-second period. Each laser pulse delivers more than a million watts of power for about five one-billionths of a second. The tell-tale colors in the resultant rock plasma were captured by the rover’s ChemCam camera and will be analyzed by the on-board spectrometers. 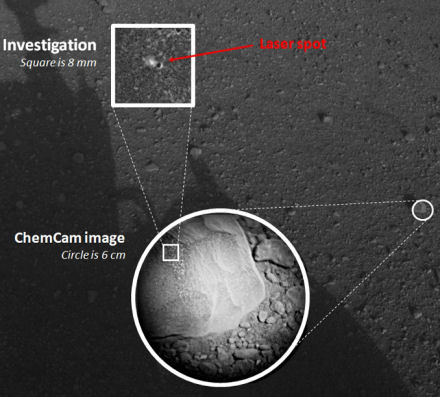 NASA scientists say they aren’t expecting any major revelations from Coronation’s analysis, stressing that the inaugural rock zap was only a test run. “The goal of this initial use of the laser on Mars was to serve as target practice for characterizing the instrument,” noted ChemCam Principal Investigator Roger Wiens of Los Alamos National Laboratory.

ChemCam Deputy Project Scientist Sylvestre Maurice added that the results from the test were better than expected. “It’s surprising that the data are even better than we ever had during tests on Earth, in signal-to-noise ratio,” he noted. “It’s so rich, we can expect great science from investigating what might be thousands of targets with ChemCam in the next two years.”

The researchers will now check whether the composition of the rock plasma changed as the laser pulses progressed. If it did change, that could indicate dust or other surface material being penetrated to reveal different composition beneath the surface.