You are here: Home › News › Space › Live! Curiosity: countdown to Mars landing
By Will Parker on August 6, 2012 in News, Space 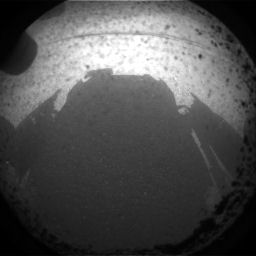 The first thumbnail pics have been transmitted from its low-res hazcams. The rover’s shadow can be seen in the picture. Control of the mission will now be passed to the surface team.

“Today, the wheels of Curiosity have begun to blaze the trail for human footprints on Mars. Curiosity, the most sophisticated rover ever built, is now on the surface of the Red Planet, where it will seek to answer age-old questions about whether life ever existed on Mars – or if the planet can sustain life in the future,” said NASA Administrator Charles Bolden. “This is an amazing achievement, made possible by a team of scientists and engineers from around the world and led by the extraordinary men and women of NASA and our Jet Propulsion Laboratory. President Obama has laid out a bold vision for sending humans to Mars in the mid-2030’s, and today’s landing marks a significant step toward achieving this goal.”

Curiosity landed at 10:32 p.m. Aug. 5, PDT, (1:32 a.m. EDT Aug. 6) near the foot of a mountain three miles tall and 96 miles in diameter inside Gale Crater. During a nearly two-year prime mission, the rover will investigate whether the region ever offered conditions favorable for microbial life.

“The Seven Minutes of Terror has turned into the Seven Minutes of Triumph,” said NASA Associate Administrator for Science John Grunsfeld. “My immense joy in the success of this mission is matched only by overwhelming pride I feel for the women and men of the mission’s team.”

Curiosity returned its first view of Mars, a wide-angle scene of rocky ground near the front of the rover. More images are anticipated in the next several days as the mission blends observations of the landing site with activities to configure the rover for work and check the performance of its instruments and mechanisms.

“Our Curiosity is talking to us from the surface of Mars,” said MSL Project Manager Peter Theisinger of NASA’s Jet Propulsion Laboratory in Pasadena, Calif. “The landing takes us past the most hazardous moments for this project, and begins a new and exciting mission to pursue its scientific objectives.” 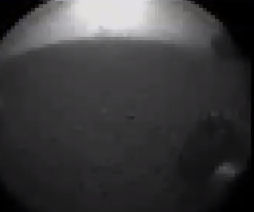 Curiosity is transmitting. The first thumbnail pic has been transmitted from its low-res hazcam (above). The rover’s wheel can be seen to the right of the picture.

7 minutes to entry. Cruise ballast has just been ejected.

One hour until the nail-biting descent begins…

NASA have ceased transmitting commands to the Mars Science Laboratory spacecraft and it has entered fully autonomous mode for the landing. It has just entered the orbit of Deimos.

NASA report the Mars Science Laboratory spacecraft and its Curiosity rover are “all systems go” for touchdown in Mars’ Gale Crater tonight at 10:31 p.m. PDT (1:31 a.m. EDT Aug. 6). Flight controllers earlier decided to forgo the sixth and final opportunity for a course-correction maneuver. In addition, this afternoon, mission controllers determined that no further updates are necessary to the onboard information the spacecraft will use during its autonomous entry, descent and landing. As of 6:18 p.m. PDT (9:18 p.m. EDT), MSL was approximately 36,000 miles (57,936 kilometers) from Mars, traveling at a speed of about 8,400 mph (about 3,755 meters per second).

How long until Curiosity begins communicating from the surface of Mars?

This video details the various scenarios that might prevent the Curiosity rover from communicating immediately after touchdown with the JPL control room back on Earth.

Fingers crossed! How the most complicated planetary descent ever attempted will happen

This animation details the complex chain of events that have to unfold during descent to gently place the car-sized Curiosity rover on the surface of the Gale crater.

What to expect from Curiosity’s first pictures 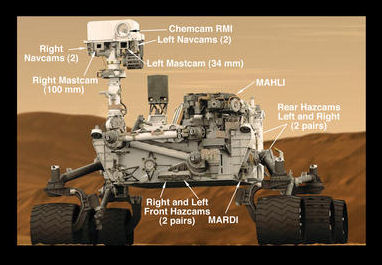 The Curiosity rover’s very first images will come from the one-megapixel Hazard-Avoidance cameras (Hazcams) attached to the body of the rover. Once engineers have determined that it is safe to deploy the rover’s Remote Sensing Mast and its high-tech cameras, Curiosity will begin to survey its exotic surroundings.

“A set of low-resolution gray scale Hazcam images will be acquired within minutes of landing on the surface,” said Justin Maki of NASA’s Jet Propulsion Laboratory. “Once all of the critical systems have been checked out by the engineering team and the mast is deployed, the rover will image the landing site with higher-resolution cameras.”

Maki led the development of Curiosity’s 12 engineering cameras – eight Hazcams at the front and back of the rover, and four Navigation cameras (Navcams) at the top of the rover’s “look-out” mast. All the engineering cameras acquire black-and-white pictures from left and right stereo “eyes,” which are merged to provide three-dimensional information. Half of the cameras are backups, meaning there’s one set for each of the rover’s A- and B-side redundant computers.

The very first images are likely to arrive more than two hours after landing, due to the timing of NASA’s signal-relaying Odyssey orbiter. They will be captured with the left and right Hazcams at the back and front of the rover, and they will not yet be full-resolution (the two images arriving on Earth first are “thumbnail” copies, which are 64 by 64 pixels in size). The Hazcams are equipped with very wide-angle, fisheye lenses, initially capped with clear dust covers. The covers are designed to protect the cameras from dust that may be kicked up during landing; they are clear just in case they don’t pop off as expected.

These first views will give engineers a good idea of what surrounds Curiosity, as well as its location and tilt. “Ensuring that the rover is on stable ground is important before raising the rover’s mast,” said Mission Manager Jennifer Trosper at JPL. “We are using an entirely new landing system on this mission, so we are proceeding with caution.”

Color pictures from the rover’s Mars Descent Imager, or MARDI, acquired as the rover descends to the Martian surface, will help pinpoint the rover’s location. Initial images from MARDI are expected to be released Aug. 6, the day after landing. These will also be in the form of thumbnails (in the case of the science cameras, thumbnails can vary in size, with the largest being 192 pixels wide by 144 pixels high). One full-resolution image may also be returned at this time.

Additional color views of the planet’s surface are expected the morning of Aug. 7 from the Mars Hand Lens Imager, or MAHLI, one of five devices on the rover’s Inspector Gadget-like arm. The camera is designed to take close-up pictures of rocks and soil, but can also take images out to the horizon. When Curiosity lands and its arm is still stowed, the instrument will be pointed to the side, allowing it to capture an initial color view of the Gale Crater area.

Once Curiosity’s mast is standing tall, the Navcams will begin taking one-megapixel stereo pictures 360 degrees around the rover as well as images of the rover deck. These cameras have medium-angle, 45-degree fields of views and could resolve the equivalent of a golf ball lying 82 feet (25 meters) away. They are designed to survey the landscape fairly quickly, and, not only can they look all around but also up and down. Navigation camera pictures are expected to begin arriving on Earth about three days after landing if the mast is deployed on schedule. Like the Hazcams, Navcam images are used to obtain three-dimensional information about the Martian terrain. Together, they help the scientists and engineers make decisions about where and how to drive the rover and which rocks to examine with instruments that identify chemical ingredients. “A large part of the surface mission is conducted using the images returned from the cameras,” said Maki.

Also, about three days after landing, the narrower field-of-view Mast Cameras (Mastcams) are expected to start snapping their first shots. These two-megapixel color cameras will reveal the rover’s new home in exquisite detail. Small thumbnail versions of the pictures will be sent down first with an initial high-resolution panorama expected more than a week later. The camera of the Chemistry and Camera (ChemCam) instrument will provide a telescopic view of targets at a distance.

As the mission progresses, the entire suite of cameras and science instruments will work together to hunt for clues to the mystery of Mars and help answer the long-standing puzzle of whether our next-door-neighbor planet has ever offered environmental conditions favorable for microbial life.

NASA’s Jet Propulsion Laboratory in Pasadena, California will be information central for news of the progress of NASA’s Curiosity Mars rover’s landing. Visit an interactive page athttp://bit.ly/mslmsa to explore the control room and get a who’s who of team members. 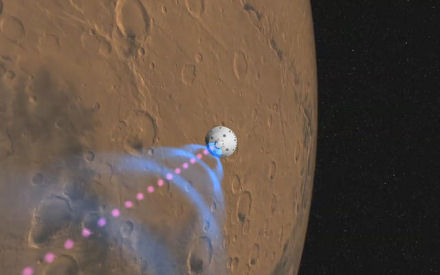 NASA report that all systems on the Mars Science Laboratory spacecraft are functioning perfectly with an estimated landing time of 10:31 p.m. PDT (1:31 a.m. Aug. 6 EDT) for the Curiosity Rover.

Controllers decided Sunday morning to forgo the sixth and last opportunity on the mission calendar for a course-correction maneuver. The spacecraft is headed for its target entry point at the top of Mars’ atmosphere precisely enough without that maneuver. 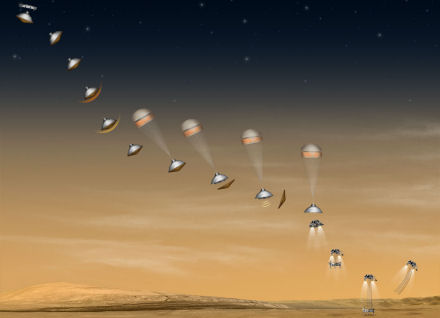 Later today, mission controllers will choose whether or not to use a last opportunity for updating onboard information the spacecraft will use during its autonomous control of the entry, descent and landing. Parameters on a motion tracker were adjusted Saturday for fine-tuning determination of the spacecraft’s orientation during the descent. 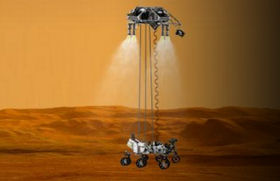 During the final few minutes of Curiosity’s descent to the surface of Mars, the Mars Descent Imager, or MARDI, will record a full-color video of the ground below. This will provide the Mars Science Laboratory team with information about the landing site and its surroundings, to aid interpretation of the rover’s ground-level views and planning of initial drives. Hundreds of the images taken by the camera will show features smaller than what can be discerned in images taken from orbit. The video will also give fans worldwide an unprecedented sense of riding a spacecraft to a landing on Mars.

At the critical moment of Curiosity’s touchdown, controllers and the rest of the world will be relying on NASA’s Mars Odyssey orbiter to provide immediate confirmation of a successful landing. Odyssey will turn to point in the right direction beforehand to listen to Curiosity during the landing. If for any reason that turn maneuver does not work, a successful landing cannot be confirmed until more than two hours later.

“Excitement is building while the team is diligently monitoring the spacecraft,” said mission manager Brian Portock. “It’s natural to get anxious before a big event, but we believe we are very well prepared.”

The landing will end a 36-week flight from Earth and begin at two-year prime mission on Mars. Researchers will use Curiosity’s 10 science instruments to investigate whether Martian environmental conditions have ever been favorable for microbial life.