You are here: Home › News › Mars Rover Snapped From Orbit
By Will Parker on October 9, 2006 in News

A high resolution camera on NASA’s Mars Reconnaissance Orbiter has taken a remarkable picture that shows the exploration rover Opportunity poised on the rim of Mars’ Victoria crater. 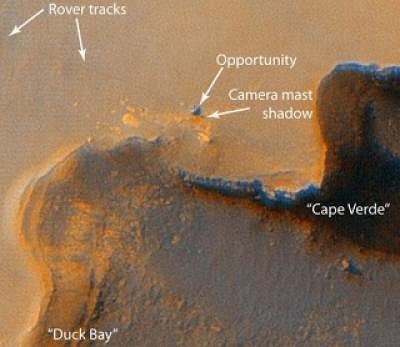 “We’re poised to have a fantastic mission, and we’re not even at prime science mission yet,” said Alfred S. McEwen. “This was our very first attempt to image ‘off-nadir’ (at an angle as opposed to straight down), and it worked fabulously well,” he added. “It’s been an exciting week.”

The rover Opportunity drove more than five miles to get to Victoria crater, an impact crater at Meridiani Planum, near Mars’ equator. The HiRISE camera took its picture five days later, at 3:30 p.m. local Mars time, as the sun was about 30 degrees above the horizon, illuminating the scene from the west. The NASA orbiter was flying 186 miles above the planet’s surface. McEwen said that the HiRise camera could resolve objects that are 35 inches across at that altitude. 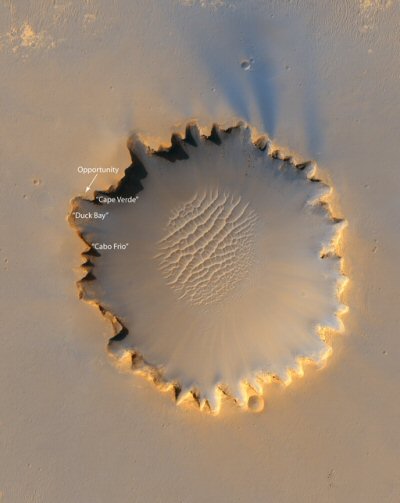 “The ground-truth we get from the rover images and measurements enables us to better interpret features we see elsewhere on Mars, including very rugged and dramatic terrains that we can’t currently study on the ground,” McEwen said. “Stay tuned,” McEwen said at the NASA briefing. “If you think this HiRISE image is spectacular, just wait.”

Dejah Thoris and the Green Men of Mars Volume 1 by Rahner, Mark in Used - Like