You are here: Home › Evolution › News › Scientists mull advantage of tasting words and hearing colors
By Will Parker on November 22, 2011 in Evolution, News 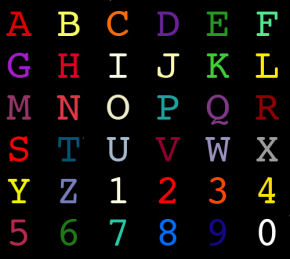 Carried by a surprisingly large 4 percent of the population, scientists David Brang and VS Ramachandran have been pondering why the synesthesia gene is preserved in the human race and what evolutionary advantage it might provide. In a discussion paper, published inPLoS Biology, the researchers suggest that the gene may deliver an advantage through enhanced creativity.

Synesthesia is defined as a condition in which a sensory stimulus presented to one modality elicits concurrent sensations in additional modalities. For example, a person may taste words and hear colors. Theoretically, synesthesia can bind any two senses, but by far the most common variants are those where auditory tones and (colorless) numbers produce vivid colors.

The specificity of these evoked colors remains stable over time within any given individual, but the same stimulus doesn’t necessarily evoke the same color in different people. Familial linkage analyses show a strong genetic component to synesthesia and the gene is believed to be spread evenly across genders.

In their article, Brang and Ramachandran canvas the notion that the synesthesia gene may have a “hidden agenda,” much as the sickle cell anemia gene has with malaria resistance. Specifically, they suggest that the hidden agenda is creativity and metaphor.

Interestingly, it has also been observed that synesthetes often possess other cognitive traits thought to be beneficial. One well-characterized savant has demonstrated remarkable memory abilities: Daniel Tammet used his synesthesia to memorize pi to 22,514 digits.

Generally, the authors note, synesthetes report their cross-wired sensory experiences to be both largely positive and to engender benefits for creative aspects of their lives. Past studies have confirmed the increased incidence of synesthesia among artists and, relative to controls, synesthetes report spending more time engaged in creative activities.

Brang and Ramachandran note that the nature of the link between synesthesia and creativity (including metaphor) remains elusive given that synesthesia involves arbitrarily connecting two unrelated things (e.g., color and number). They suggest that one potential solution to this problem comes from realizing that any given word has only a finite set of associations (e.g., the sun is warm, nurturing, radiant, bright, etc.). The overlapping region among halos of associations between two words – the basis of metaphor – exists in all of us but is larger and stronger in synesthesia as a result of the cross-activation gene; in this formulation synesthesia is not synonymous with metaphor, but only that the gene which produces synesthesia confers a propensity towards metaphor.

The authors conclude that synesthesia is associated with numerous benefits to cognitive processing, suggesting a basis for why this condition has survived evolutionary pressures. “Understanding both the mechanisms underlying the phenomenon and the reasons for its selection are finally at a point in which synesthesia can inform our understanding of cognitive and perceptual processes in the general population. Synesthesia, far from being a ‘fringe’ phenomenon as formerly believed, can give us vital clues toward understanding some of the physiological mechanisms underlying some of the most elusive yet cherished aspects of the human mind.”

Related:
Discuss this article in our forum
Researchers speculate that hormonal imbalances might create geniuses
Study identifies key aspects of music that evoke emotions in brain
Surreal experiences boost brain power
This Is Your Brain On Jazz